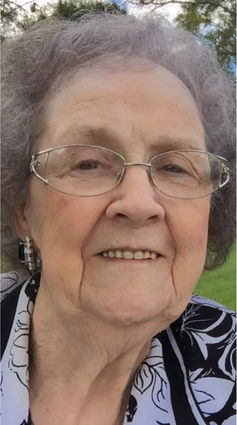 Burial will follow at St. Mary’s Cemetery Mausoleum in Orange.

Born in Loreauville, Louisiana, on November 1, 1925, she was the daughter of Thomas Michael Broussard and Katy Ray (Rial) Broussard Smith.

Dottie was a member of St. Mary’s Catholic Church and of the Catholic Daughters of America-Court of Cecelia 1396, as well as the St. Mary’s Altar Society, the VFW Women’s Auxiliary, LaDonna club, and Merry Mixers square dance club.

She enjoyed spending her free time painting, crafting, woodworking, and many other forms of art. Dottie was an avid bridge player, a bowler, and loved traveling throughout the United States and Canada pulling her travel trailer.

in 1947 and remained married for 62 adventurous years until his passing in 2009.

Dottie will be well remembered as the owner of Gifts by Dottie which specialized in shadow box purses and holiday decorations.

She was a fabulous lady who lived life to the fullest.

She was loved by many and will be greatly missed by all who knew her.

She was preceded in death by her parents; her husband, Henry Paul Vercher, Sr.; brothers, Thomas Michael Broussard, Jr.

and George “Bruce” Broussard; and her sister, Zelma Wilson.

She is survived by her son, Henry Paul “Skip” Vercher, Jr.

In lieu of flowers, memorial contributions can be made to the Alzheimer’s Association National Capital Area Chapter at 8180 Greensboro Dr.

Suite 400, McLean, VA 22102 or to St. Mary’s Catholic School at 2600 Bob Hall Rd., Orange, TX 77630.The family would like to extend their deep appreciation to the staff of Sabine Place for the love and care given to their mother, especially during the hurricane evacuation.