Most drivers survive plunge but not all

Photo: World War II veteran Robert Rothrock, 91, was pulled from his floating car by members of the Cajun Navy on Aug. 30.

More than 70 years ago, Robert Rothrock swam for his life after his landing craft sunk in choppy seas near New Zealand.

Rothrock was one of hundreds of Orange County residents who were either stalled out or swept away by the floods and fast-moving waters spawned by Tropical Storm Harvey.

“I couldn’t teach that car to swim,” Rothrock said of his small car. “I was lucky.”

Rothrock and his car began floating at the intersection of Martin Luther King Jr. Drive and Adams Bayou, north of Orange.

“A boat and three men in it, they jumped in to reach me and it [water] went nearly over their heads. They pushed me over to the middle of the road, and jerked the door open,” he said.

“They had done rescued one or two of us. There were four or five of us they pulled out on MLK that morning. I didn’t get their names or nothing from those boys. I guess it was the Cajun Navy that rescued us.”

Rothrock is related to Justice of the Peace Precinct 1 Hershel Stagner, whom he joined last week at the Wednesday Lunch Bunch gathering at JB’s Barbecue.

Another dining with the group was Precinct 2 JP Derry Dunn.

Dunn also had his rescue story.

Turns out he was a day ahead of Rothrock and should have been taking it easy on Aug. 29 as he recuperated from shoulder surgery.

“My daughter and four kids were at the Mauriceville Middle School gym and couldn’t get out, because the water was too high,” Dunn recalled.

“Water come up on the floorboard, and, all of a sudden, we were floating. We just floated off the road. It was a weird sensation.”

The water carried the truck and two men into a gulley.

“We got a window down, but there wasn’t much I could do with one arm in a sling,” Dunn recalled.

“The driver got out through his window and got on top of the truck. Fortunately, there was a boat following us. He came up on my side and we were able to get the door open and I was eventually able to slide out into the boat.”

Dunn and his friend were taken by boat to Little Cypress Junior High and later that night the judge returned home to reunite with his daughter, who had been rescued from her high water challenge. 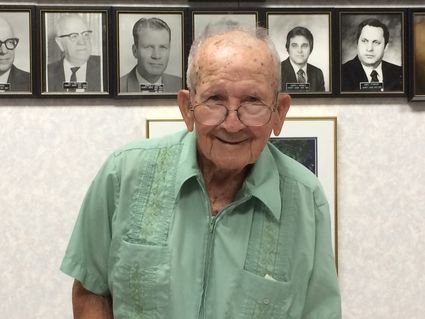 Her husband, 54-year-old Lee McGraw, was trying to help a rescue worker Aug. 30 when he was swept away in his truck by Cole Creek, from the Interstate 10 service road.

“He just drove right in and I was screaming, ‘Get out! Get out!” Denna McGraw told KFDM-TV in September.

“I lost a good man. He was out helping people.”