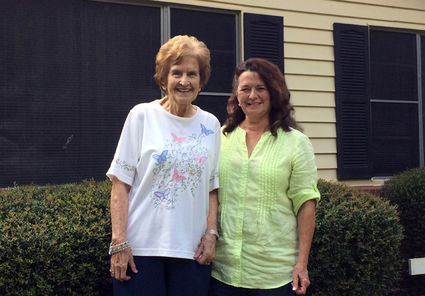 Photo: Mildred Piggott Purifoy and her daughter Sandra enjoy the sunshine in front of their Bridge City home last week. Purifoy, a Bridge Citizen since 1958, was born Oct. 4, 1917. (Photo by Dave Rogers)

She gets carded everywhere she goes.

For years – nay, decades – showing new acquaintances her driving license would be the only way Mildred Prejean Piggott Purifoy could prove to people how old she is.

“No one can ever guess her age,” says son-in-law Darrell Segura.

“I asked a new doctor how old he thought I was and he said, ‘60,’ Mildred recalled.

So, believe it or don’t: Mildred celebrates her 100th birthday today. Her four children and their families will be there.

A bad knee is her only physical problem.

“I think maybe the best thing is calling everybody’s attention the fact that you can be 100 and still have your own home and be around your children.”

“Who would’ve ever thought we would evacuate?”

Well, truth to tell, storms have forced Mildred to evacuate from her Bridge City home several times since moving with husband Terrell “TJ” Piggott from Port Arthur in 1958.

She actually evacuated from her home twice for Tropical Storm Harvey. The first, an Aug. 29 move into the Bridge City LaQuinta Inn, ended when the building lost power and she had to be carried downstairs from her third-floor room.

Later, she and Sandra caught a ride with a neighbor’s home health workers to the Lake Charles Civic Center. That led to three nights spent sheltering in the LSU AgCenter in Alexandria.

It wasn’t fun. But Mildred got a personal visit from Louisiana Gov. John Bel Edwards when someone told him that a 99-year-old woman was staying there.

And guess what he told her?

So, how old is Mildred?

She’s so old she remembers living “way out in the country” and having to hitch “Bessie” to the buggy to get to church every Sunday.

She’s so old she recalls the family’s “refrigeration” happened when her mother put meat in a jar, tied a rope around the jar and dropped it “way down in the well.”

Growing up in Lawtell, La., a small Cajun community outside Opelousas, Mildred never knew about the Depression. She spoke no English when she started school. She studied by the light from an oil lamp.

She was the youngest of six sisters and, only 10 when her mother died.

“All my sisters wanted to take me in, but their husbands didn’t want to, because of the cost,” Mildred said.

She graduated from elementary school at 13 with the highest grades in her class.

“My sister said, ‘Now you can get married.’ ‘Married?’ I said. ‘I don’t even have a boyfriend,’” Mildred recalled 87 years later.

“I cried all summer long. My dad said, ‘Leave her alone. If she wants to go to high school, let her go.’”

In 1935, after becoming the first in her family to finish high school, she moved to Port Arthur to live with her sister and brother-in-law.

She was working as a waitress and cashier at a restaurant in Port Arthur and soon began dating a merchant marine who would become her husband of 57 years.

In 1958, they moved to Bridge City and were the first to build on Lafitte Street. Back then, Roundbunch was a dirt road.

“Terrell’s sister-in-law said, ‘Why do you want to go to Bridge City? There’s nothing there,’” Mildred said. “I said ‘It’s going to build up.’

“Within a few years, guess who came to see me all the time?”

“Now it comes with a note: Please let us know if this person is still alive,” she said with a laugh.

Alive? Mildred has outlived a second husband – Edwin Louis Purifoy, who she met at a Senior Center and married in 2001. He was 76 at the time. Mildred was 83, but she looked … marvelous.

“He got on his knees and he asked me to marry him,” she recalled.

So what’s her secret?

“I don’t take a lot of medicine,” Mildred said. “Too much medicine will kill you.”