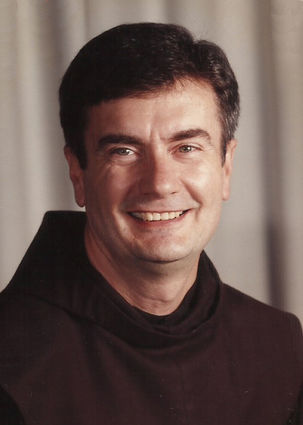 The family will receive friends for visitation at St. Mary Catholic Church in Orange, Texas, Monday, November 13, 2017 from 5:00 p.m.

Con-celebrating will be Father Larry Gosselin, OFM and other Franciscan Clergy.

The Rite of Committal will follow at St. Mary Catholic Cemetery in Orange.

Honorary pallbearers will be all of Father Rob’s Franciscan Brothers.

The first son born following two girls, he was a very welcomed addition to the family.

He was a very precious child and was so cute and charming.

He could get away with anything.

It is here he received the Sacraments and was nurtured in the faith.

He attended St. Mary Elementary School and following his graduation from St. Mary High School, attended the University of Dallas, U.C.L.A. at Berkley and Boston University.

He received many degrees and honors while in college.

He attended Seminary; was vested in 1975 and was ordained by Bishop Schubsda on September 11, 1982 at Mission Santa Barbara in Santa Barbara, California.

It is very fitting that we now remember and celebrate his life in this Church.

For a time, he lived in the Holy Land and often spoke of how he would love to again live in the mountains of Jerusalem.

At the time of his passing, he was assigned to St. Petersburg, Florida.

He had a special appointment and project in his ministry of the Divine Will of God.

Father Rob was appointed a Papal Missionary of Mercy by Pope John Paul, II. As a missionary, he traveled to many states and countries, giving retreats, missions and being a guest speaker at conferences and meetings.

He was honored to Con-celebrate Mass with Pope John Paul, II. A humble man, his accomplishments, which he never liked to talk about, were many.

He had Master’s degrees in Theology, English and Philosophy.

He could speak five languages fluently; play many different musical instruments; had a beautiful voice; and was a gifted writer.

He served as director of Radio Maria in Alexandria, Louisiana.

He loved his ministry there because he could touch so many people through the radio programs.

Rob was very outgoing and never met a stranger.

He made thousands of friends all over the world as he served in the states and Europe.

He was a quiet, peaceful man who enjoyed being alone in prayer.

Following the death of his father at a young age, Rob had to become the “man of the house.” He helped his mother as she worked to raise five children.

He was a dependable, responsible and an awesome brother.

He was always there for his family.

He would counsel us, pray for us and pray with us.

Father Rob was such a joy and very precious man to our family and the world.

He will be missed by all who knew and loved him but we rejoice that he has entered into the eternal presence of his Lord and is again with our Mom and Dad.

We love you Rob! You were a good and faithful servant! Father Rob was preceded in death by his parents, C.J. and Earline Young.

Arrangements are under the direction of Claybar Funeral Home in Orange.