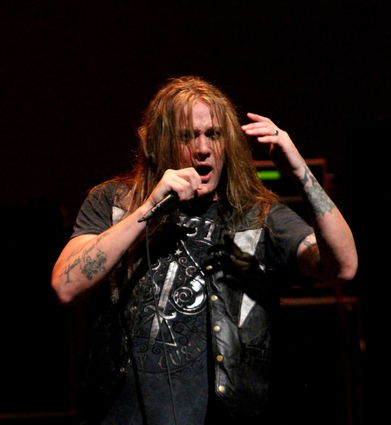 Sebastian Bach, the former vocalist of the rock group Skid Row, rocked out for several hundred fans at the Jefferson Theatre in Beaumont on Wednesday, Nov. 8. The artist performed a 75 minute set of classic hits, such as “18 and Life,” “Monkey Business,” and “Youth Gone Wild,” as well as solo songs and covers by artists such as Rush and AC/DC. (Photo by Tommy Mann Jr.)

It may have taken a few minutes for rocker Sebastian Bach and his band to get really warmed up, but once they did Wednesday’s concert in Beaumont became red hot.

Bach, the charismatic former frontman of rock outfit Skid Row, rolled into Southeast Texas on Wednesday (Nov. 8, 2017) for a concert inside the historic Jefferson Theatre in downtown Beaumont and rocked out with several hundred of his loyal following.

Fans were treated to some real gems and classic Skid Row tunes on Wednesday, but the show started off a little more low key than the majority of the audience probably anticipated. The Jimi Hendrix Experience classic tune “Little Wing” served as the opening song of the night for Bach and company, which was followed “Breaking Down,” a true gem from Skid Row’s underappreciated “Subhuman Race” record.

With his youthful smile and witty banter with members of the crowd, Bach and his band launched into the more well known Skid Row tracks that fans had been waiting to hear, such as “18 and Life” and “I Remember You” before turning up the heat and going for the throat with heavier tunes “Slave to the Grind,” “Big Guns,” “Sweet Little Sister,” “Piece of Me,” and set closer “Youth Gone Wild.”

The night consisted mostly of Skid Row material, but Bach made sure to include some tracks from his solo efforts as well, including “Love is a Bitchslap” and “American Metalhead,” the latter of which was originally recorded by Painmuseum.”

The highlights of the night were Bach’s performance of the Skid Row classic song “Monkey Business,” which featured a scorching rendition of the Rush song “Tom Sawyer” during the breakdown of the song, and a cover of the AC/DC anthem, “TNT,” as an encore.

Although the venue was not to capacity, the several hundred fans on hand Wednesday witnessed a truly great concert from one of the most impressive vocalists in rock and roll. Even after nearly 30 years since his start with Skid Row, Sebastian Bach is still as entertaining and talented in 2017 as he was in 1989.

The City of Beaumont continues to provide a variety of live music entertainment for residents of Southeast Texas in 2017. Upcoming events at the Jefferson Theatre include Bri Bagwell and Friends on Thursday, Nov. 16, and Jack Ingram on Thursday, Dec. 21. Visit discoverbeaumont.com for more information on these and other events.

Slave to the Grind

Love is a Bitchslap

In a Darkened Room