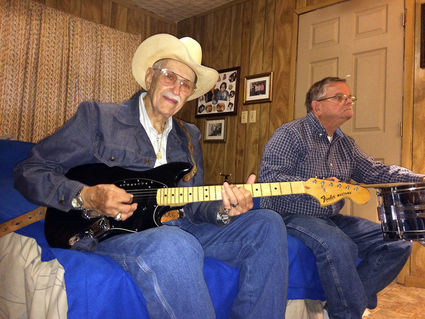 Doug Burch can’t wait to get back to his Friday night jam sessions.

Since then, he’s been staying with cousin Tommy Wolfford and his family while workmen restore his place.

“The house is coming along pretty good,” he said Tuesday.

Imagine just a bit and one can already hear the strains of “Faded Love” coming from his guitar.

“It’s how we kick off the program when we have a jam,” he said, referring to the old Bob Wills song.

Country-western performers like Bob Wills and Bill Monroe were Burch’s music heroes, along with Roy Acuff and Floyd Tillman.

Burch figures he’s been making music since he was 14, a span of 80 years.

He was traveling with a band before he went into the Navy during World War II and even played with the band at the Chiefs’ Club at Pearl Harbor.

After spending two and a half years as an aviation machinist island-hopping from one airbase to another as the Americans leapfrogged northward to Japan, Burch returned to Orange and worked a variety of jobs.

He drove a truck for Montgomery Wards and was stocker for Krogers on 16th Street.

And always, he played music.

“We played country music and people sent in requests. One song I did, people thought I wrote and I never told them I didn’t, was “Dust On The Bible.’”

“We didn’t go across country, just around here,” he said. “We played night clubs and beer joints, the Eagles Lodge.”

Some of his recent jams have included banjo player Louise Ricks and another brother, Ray Burch, on electric bass.

“I don’t worry about what people think. Just play the best

you can do. That’s what I always do.”