SCHOOL TROUT CAN BE FRUSTRATING 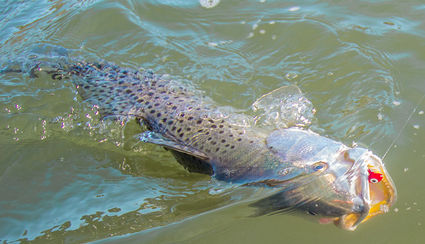 While they can be an absolute blessing for bay fishermen, clouds of gulls and terns working over surfacing shrimp are very much akin to fool’s gold.The user-friendly sign that feeding fish are at least in the area is a confidence builder like no other, but relying on the same scenario to occur even two days in a row can be a recipe for disappointment.

It is all based on the food chain.The ultimate loser in the deal are the shrimp migrating out of the marshes.Trout, redfish, flounder and even bass continuously herd the tasty buffet into deeper water in an effort to make the dining effort ridiculously easy.The panicked shrimp attempt to avoid their certain demise by rushing to the surface only to be finished off by the hungry birds.

Ironically enough, the fishermen are the shrimp’s only friend.The more fish they catch out of a school, the quicker the shrimp can once again seek refuge on the muddy bottom.The birds then leave hoping to find the same thing happening somewhere else.As a rule, the hiding shrimp are quickly discovered by the remaining fish and the entire scenario repeats itself over and over.

Thus the reason the more astute bird fishermen are so reluctant to immediately rush off in search of another flock of birds.They know that sooner or later that same school of fish will give their presence away by pushing the shrimp back to the surface. When this occurs there are no birds to alert other anglers and they have the fish to themselves!

The single biggest problem with this unexpected gift on the part of Mother Nature is that you may not see a single gull the following day.I can’t count the number of times that I have called a friend or a client and told them that they needed to get over here as quickly as possible only to not see a bird the next day!

It is all tide related which can be magnified by a stiff north wind ushering in the next cold front.The wind alone can dry up surrounding marshes and evacuation via deeper water is the only option.

Unlike the hotter months of late summer when almost the same thing takes place in the open lake, the fish are usually chasing massive schools of shad rather than shrimp.The bite is not as user-friendly simply because the fish do not have to drive the bait to the surface to attract the birds.In the event that you do not see fish blowing holes in the surfacing schools of shad, there is a good chance that there are no fish around.Lots of casting for very few strikes!

This is not the case when the fish are dining on shrimp.As a matter of fact, it is generally more a case of simply figuring out the right color and right size of the lure that will trigger the most strikes.You may find more juvenile specks and small sand trout mixed in, but it is rare indeed that you will not get multiple bites on a given cast.

These fish know they are on the clock once they drive the shrimp to the surface and they are not picky. Once the shrimp make it back to the bottom, however, the catching part requires a little more experimenting on the part of the angler.While the fish many or not be suspended in the top column of water, I find a lighter head and a longer plastic tail to be more effective.

The bait has a larger profile and sinks much slower giving the fish more time to make up their mind.They may want you to swim it just beneath the surface or let it slowly sink to the bottom, but that combination has worked for me when nothing else will.

Having said that, I have seen Capt. Johnny continue to catch trout under the same circumstances time and again with a topwater lure.It is rare, however, when he is not throwing a topwater as he is convinced that it will fool the largest trout in every school.His track record supports his theory!

Last, but not least, a tail rigged on three feet of leader under a cork can be the ultimate solution under every condition.The clicking noise attracts the fish and the lure remains in the chosen strike zone at all times.Everything from a GULP product to a five inch Assassin will work in combination with the cork!

If you find the fish under the birds tomorrow just count your blessings and enjoy the day.If they aren’t there you better have a good plan B.