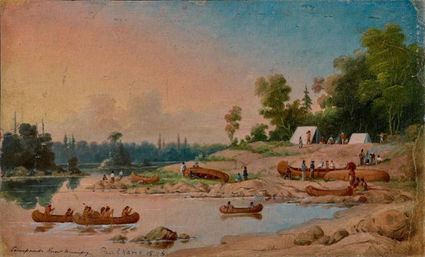 (ORANGE, TX) – The Stark Museum of Art features Paul Kane: Intrepid Artist and Adventurer, a special exhibition of an artist who overcame obstacles in his artistic quest. Paul Kane (1810-1871) wanted to record the landscape and the people of North America before they changed. From 1845-1848, Kane camped and canoed across the continent, sketching in watercolor and oil paints along the way. The exhibition includes over 120 rarely seen works of art and manuscripts. It will be on view through June 2, 2018.

Paul Kane: Intrepid Artist and Adventurer focuses on the landscape views that the artist made as he explored the North American continent. He made two trips, traveling from Toronto around the Great Lakes area and then to the Pacific coast and back. Kane made sketches of the notable natural features such as waterfalls, geologic formations, and earth mounds. The artist had to travel by canoe, horseback, snowshoes, and sled. He encountered river rapids, freezing temperatures, and an ocean storm.

The exhibition is organized according to geographic regions of lakes, prairies, mountains and coast. Many of the sites the artist portrayed have changed or disappeared due to human activities such as settlement and dam building. Within the regions are portraits and scenes of life of the native peoples Kane came to document. Kane’s first-hand sketches give direct and fresh views of the historic past. He also kept a journal and a log of his sketches. Kane used these to produce a narrative about his journey. The exhibition includes Kane’s notebooks, manuscripts for his publication, and a first edition of his book Wanderings of an Artist.

Kane admired Niagara Falls and he witnessed the 1847 eruption of volcano Mount St. Helens. The exhibition includes modern videos of the dramatic falls and of the twentieth century eruption of Mount St. Helens to compare with his landscape views. Panels and labels offer commentary on the images and quotations from the artist’s book. Adjacent to the exhibition is a Step into the Painting interactive based on the artist’s Encampment, Winnipeg River.

The exhibition will have programming for additional interpretation.

The Museum will show a film on Paul Kane and have a live video chat with film director John Bessai on January 30, 2018.

Curator Sarah E. Boehme will give an Insights Lecture about Paul Kane: During and After His Wanderings onFebruary 17, 2018.

The Museum will have on view This Land Was Made for You and Me: 2018 Juried Student Art Exhibition, which will feature student artwork inspired by Paul Kane: Intrepid Artist and Adventurer.

Art by students in of Kindergarten through grade 12, from Southeast Texas and Southwest Louisiana, will be exhibited March 3--June 2, 2018.

Details on these and other programs will be on the Museum’s web site, starkmuseum.org.

The works in the exhibition are from the permanent collection of the Stark Museum of Art. The Kane sketches and manuscripts came to the Museum as a bequest of H.J. Lutcher Stark. He acquired an extensive collection from the artist’s grandson.

“Paul Kane demonstrated through his life and art the qualities of an individual who has a goal and achieves success. Born in Ireland, he lived most of his life in Canada. His paintings have special resonance in Canada; however, they are equally important for the United States. Scholars have estimated that Kane painted about forty-five per cent of his subjects were painted in what is today the United States, thus they commemorate the histories of two nations,” commented Sarah E. Boehme, Curator.