Army of helpers base at naval barracks

Photo: Judge Camp of Flower Mound, Texas, gives a volunteer crew from Texas Baptist Men their morning instructions before they depart the Orange Navy Barracks to help clean up from Tropical Storm Harvey.

The main dormitory for what was once U.S. Naval Station Orange, home to 850 sailors and attached personnel during the Korean War, is once again a beehive of early morning and evening activity.

It is serving as home-away-from-home for volunteers who come to help Orange County recover from Tropical Storm Harvey.

“This is an answer to our prayer,” Henrietta Gentry of Texas Baptist Men Disaster Relief declared on a recent night when the building at the Port of Orange was filled with 111 volunteers, including 38 from the group AmeriCorps.

Good Samaritans from throughout the state and nation who are part of Southern Baptist Disaster Relief and Texas Baptist Men have been in Orange County for more than three months now.

They are among a number of faith-based groups on a mission of service to flood-affected Southeast Texans.

They work to clear flood damage from homes and begin the rebuilding needed to get people back in their homes.

“Showing other people you care in the midst of a crisis is one of the greatest things you can do,” said Rob Puckett, a volunteer from Guam.

“Jesus loves us and tells us we need to love other people just like he does.”

Bobby Singleton of Sulphur Springs, Texas, pulls his crew and trailer past the Orange Navy Barracks being used to house Texas Baptist Men and other volunteers helping with the Tropical Storm Harvey recovery.

“We usually go to North Orange Baptist Church, because of its size. This is the fourth time,” Gentry said, explaining the church hosted TBM after Hurricanes Rita and Ike and the 2016 Sabine River floods.

“We wanted to bring more volunteers, and the church needed space, because it is also hosting Little Cypress Elementary students” whose classrooms were damaged by Harvey.

“So Orange County was gracious enough to help us find lodging. It is an answered prayer for us to be here, because the county and the port were able to work together,” Gentry said.

The Navy Barracks date back to the establishment of Naval Base Orange in 1945, just before the end of World War II.

The base at the end of Green Avenue eventually grew to 168 acres in size with as many as 850 attached personnel during the Korean War.

Its greatest use was as home to part of the navy’s “mothball fleet,” officially the U.S. Reserve Fleet. Its workers refitted and sent 30 ships to Korea during that conflict.

Over the years, the base was downsized and closed. All but 18 acres were portioned off and sold, some to Lamar State College-Orange. The final piece, that included the barracks and warehouses, were sold to the Port of Orange in 2009.

Signal International was the last business to utilize the Barracks, early in this decade.

But the Baptists have brought in their own trailers for backup. A couple contain a portable kitchen, complete with a tent to keep all dry. Other trailers include showers and washers and dryers.

“The building has showers inside, but with 111 people here, if you don’t want to stand in line, come out here,” Gentry said.

The crews usually depart the barracks around 7 a.m., after eating a hearty breakfast and picking up materials for a cold lunch. They return in the late afternoon to shower, eat an evening meal and sleep.

The group, he said, is composed 60 percent of men and 40 percent of women, mostly retirees who donate several weeks per year to the cause of disaster recovery.

“The average age of Texas Baptist Men is 74,” Gentry said.

Volunteers wear colored caps to denote their skill level – yellow, blue and white – and work in teams based in their home cities or regions. And while the TBM coordinates the Harvey response work from Rockport to the Sabine River, Baptist Men come from all 50 states and beyond.

In a recent week, Gentry said, the barracks was playing host to groups from Texas, Arkansas, Mississippi, North Carolina and New York-New Jersey.

They come for a week or two and other groups rotate in to take their place. That goes for those in the white caps, the incident management team.

“Everybody here is on at least their third rotation – Victoria, Katy and here,” chaplain Oliver Jackson, from Midlothian, Texas, said Tuesday of the white caps seated around him in the command center.

A good-sized crew of volunteers is needed just to feed and accommodate the volunteers working in the community.

“We’ll go in and spray it with ShockWave to kill the mold. When we leave a house, it’ll be ready to come back in and start the rebuild,” said Gil Renfrow, filling the operations officer chair.

Rebuild, according to Collin County volunteer Curt Neal, is the rest.

“We want to get a complete house,” he said. That includes “sheetrock, texture, tape, paint, new cabinets, flooring, everything.”

Gentry explained that volunteer groups are assigned to houses in tiers. Groups may only do the muck-outs and painting while more skilled workers might do the sheetrocking and still other groups do the finish work.

“What is happening now,” Renfrow said, “is we’re out and about in the community and people come up to us and want to know if they can still get some help. We’re still getting people calling in, saying, ‘Can you help me?

“We’re finding out now that when it happened [the storm hit Orange County Aug. 26-30], a lot of them left Orange and are just getting back.” 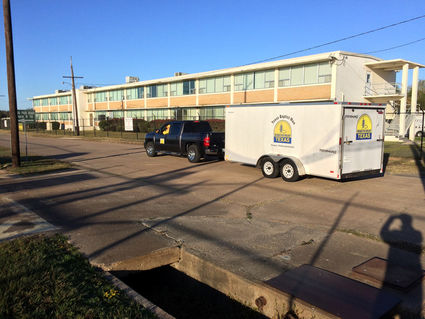