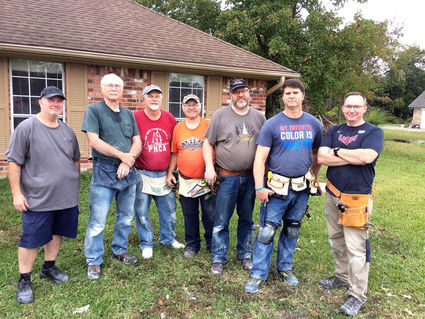 Photo: Church of Christ pastors and members from Minnesota have been in Orange working to repair homes damaged by Tropical Storm Harvey. They are Tom Mohler,

Snow was on the ground and starting to freeze when the seven men left Minnesota a few weeks ago. When they arrived to work in Orange, the temps were in the 80s.

But it wasn’t just the climate that brought the Church of Christ members to town.

“It’s the opportunity to share the love of Christ and help out some people,” said Brett Miller, pastor of Southeast Christian Church in St. Paul and a police chaplain in Minneapolis.

Miller headed the band of Christian brothers who represent just a tiny part of the thousands of faith-based volunteers who have come to Southeast Texas since Tropical Storm Harvey caused flooding in 80 percent of Orange County residences and businesses.

“When Harvey came, people were desirous to help,” Miller said. “We wanted to make connections.”

Miller gathered his group from five different Church of Christ churches in the Minneapolis-St. Paul area and came to Orange to meet the people on the ground.

He and his cohorts returned to Minnesota and now their church groups are scheduling members young and old to return to Orange County with bigger contingents.

“I brought some guys so we could do some work while we’re here,” he said. “We’ll go back and mobilize people for multiple congregations to come on multiple trips.”

Miller said his Minnesota group had conducted annual trips to New Orleans to work on rebuilds for years after Hurricane Katrina hit in 2005.

“We used to have a bus full of 50 people and hit New Orleans every year for a week,” he said. “Here, it seems better to bring smaller groups over a longer time.”

The men put up sheetrock in several homes while they were in the Orange area. Their crew included electricians and an electrical engineer, so rewiring was another service they provided.

“This is Carol’s house,” Miller explained as the men worked in north Orange one day earlier this month. “She’s a widow, and she needs help.”

Carol’s house had 28 inches of floodwater in it. She had to be rescued by boat.

“It’s neighbor helping neighbor,” Miller said. “When the church can come help where we can within the framework they [FEMA rules] establish, it’s a blessing.”

The men were ready to organize their congregations and return.

“We’ll have five or six teams coming down in the spring,” White, a pastor at Kimball Church of Christ, said.

“There’s people like us that want to help. We want to be part of the funnel to direct them to the right people.”