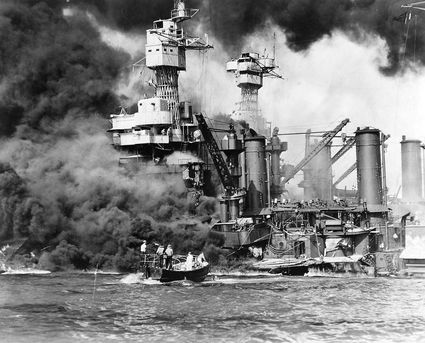 Lennie Benoit sure remembers where he was when the news flash came over the radio on Dec. 7, 1941.

It was the report of Japan’s sneak attack on the U.S. Pearl Harbor Navy base in Hawaii, the event that pulled this country into World War II.

“Me and my daddy went to visit my mom’s sister and we were driving back in a 1935 Ford with a rumble seat,” the 95-year-old retired Orange steelworker recalled Tuesday.

“We had the radio on and it was playing some music. Then they stopped the music for a special report. Pearl Harbor was being bombed by the Japanese.

“We had to think where Pearl Harbor was back in those days.”

Stout, 96 and sharp as a tack, was in Pearl Harbor and survived the hail of explosive ordnance from the sky and the hellfire that was flaming oil floating atop the harbor’s waters.

On the day before the 76th anniversary of what become known as Pearl Harbor Day, Stout is the only Pearl Harbor survivor still alive from a good-sized 2006 Southeast Texas Veterans Group list of Golden Triangle men who were there that day.

His story never gets old, even if Stout sometimes tires of telling it.

He was having breakfast in the belly of his ship, the USS Utah, when he heard the first bomb explode.

Initially, the freshly minted sailor thought it was a drill.

“I saw all the commotion going on and thought, somebody’s having some fun,” he said as part of an oral history prepared for the Pearl Harbors Survivors Association. “But then a bullet went right over the top of my head and I knew it wasn’t no fun.”

A World War I battleship, the USS Utah was being used for target practice by the Navy in 1941. And the Japanese dive-bombers found it an inviting target that Sunday sunup while it was tied to the dock.

Within minutes of the first shots being fired that morning, torpedoes fired by Japanese planes slammed into the Utah’s hull and the ship began to list. Just 10 minutes later, the ship snapped its mooring lines, rolled over and capsized.

Stout had to run through machine gun fire to cross the deck and slide down the mooring line to take cover ashore.

A total of 64 men went down with the ship and died.

Maurice Fournet remembers he had a much different day than Stout.

“I was in college at Lafayette, Louisiana, when the news came over the radio, the old squawk boxes in those days,” said the Mauriceville resident, 94.

“They had already starting drafting people. I guess it was in preparation for Hitler’s antics in Europe. I went ahead and finished my first year in college.”

Fournet, who would spend four years as an Army Air Corps aerial gunnery instructor, enlisted on the one-year anniversary of the Pearl Harbor bombing, Dec. 7, 1942.

No big story about the date of his enlistment, he said.

“I did it because I wanted to fly,” he said. “I wanted to pick my service. I didn’t want to be drafted.”

Ruby Parks had graduated from Orange High School a year before the “date which will live in infamy,” as President Franklin Roosevelt called it.

She was working in the office of Orange’s Texas Creosoting Plant that year and had gone with some of her friends to the soda fountain.

“I had gone home after church and had lunch with my family, then went with some friends to get a soda at the drug store on 5th Street,” she said. “We heard the announcement there, then I remember we sat in the back of the parking lot wondering what it was all about.”

The newspaper headlines later impressed upon her the importance of the event. A year later, she was serving in the U.S. Coast and stationed in New Orleans.

“I was very patriotic,” Parks, 94, said. “I wanted to do what I could. I know I sent sailors to sea, I did serve in the office and do my part, but I didn’t feel the war effort like people that were overseas.”

Eugene Goudeau of Orange, 94, would eventually spend three years of World War II in the Pacific as a sailor on the USS Dyson, a destroyer built in Orange.

But he didn’t hear about the attack on Pearl Harbor as soon as most others.

“We didn’t have a radio,” he said. “It was just word of mouth. I heard about it maybe a couple of days later. It didn’t register on me, what it all meant.”

Orange County and the U.S. soon figured it out. The world would never be the same.