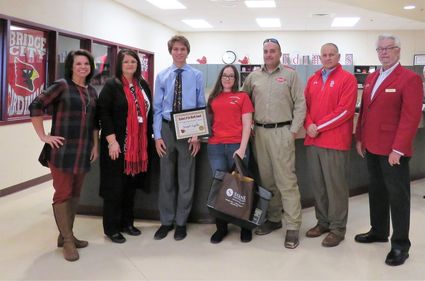 Joseph is the son of Holly Chance and Danny Estillete, and Joe Segelke. He is ranked #110 of 197 with a GPA 3.38. Joseph’s Awards and Honors include:

Joseph’s Clubs and Organizations include:

Joseph is a part of the First United Methodist Choir.

Tami Goss, Director of Bands, said, “Joseph Segelke has been selected as Fine Arts Student of the Month for his overall excellence in all aspects of music. Joseph is an outstanding bass trombonist that ranked 5th in individual jazz performance in the state of Texas this year. He has been a member of the All-Region and All-Area bands every year in high school. He was also a member of the Texas All-State choir as a junior, making him one of the very best in Texas. Joseph is not only an outstanding musician, but he is a person of integrity and strong character that many of his peers respect and admire. I am pleased to nominate Joseph as the student of the month.

Gwyn Ramos, Choir Teacher, said, “I would like to nominate Joseph Segelke for December Student of the Month.

Joseph is very active in both Band and Choir.

As a sophomore, he placed first at Area on the Bass Trombone and taped for All-State.

As a junior, he qualified for Area in Choir, Band, and Jazz Band, and he made the All-State Jazz Band (5th out of 48 Area students).

He made the All-Region Choir and will be auditioning for All-Region Band soon.

Joseph is even planning on being a part of BC’s first musical in the spring.

Charlyn Voight, Chemistry & Forensic Science Teacher, said, “Joseph Segelke easily stands out as an exemplary student, not only in regard to academics and character, but also in his significant contributions to BCHS’s Fine Arts programs, where he has successfully performed in Choir, Band, and Jazz Band at Area, Region, and State level events and competitions, all while juggling classwork and maintaining composure under great pressure. Joseph has already impressed me repeatedly in my short time at BCHS, and I am honored to have the privilege to teach such a talented student.”

When asked about his future plans, Joseph said, “I plan to go to college for music education, then teach band or choir, and to never stop performing music.