Branding the American West: Paintings and Films, 1900-1950, co-edited by the Stark Museum of Art’s curator, Dr.

Sarah Boehme, and printed by the University of Oklahoma Press has received three awards this year.

In September, the publication received an Award of Merit from the American Association for State and Local History (AASLH.) The AASLH Leadership in History Awards, now in its 72nd year, is the most prestigious recognition for achievement in the preservation and interpretation of state and local history.

This past November the publication received the 2017 Paterson Kerr Award Book Award for the best-illustrated book on the history of the American West from the Western History Association.

The Paterson Kerr Award Committee was extremely impressed with the originality of Branding the American West, its scope, and its significant contribution to the field of western history.

This publication is from The H.J Lutcher Stark Center for Physical Culture and Sports, The University of Texas at Austin and distributed by Tower Books, an Imprint of the University of Texas Press, The book is a culmination of many years’ research on the history of the illustrious Lutcher/Stark lumbering family of Southeast Texas.

This work represents the culmination of the first time the extensive archives of the Nelda C. and H.J. Lutcher Foundation have been made available to researchers.” Rienstra and co-author Stiles attended the Awards Banquet in Austin in September.

The Stark Foundation President and CEO Clyde V. McKee, III noted, “The Staff and Board are very pleased to have these publications that highlight the vision and legacy of the Founders, Nelda C. and H.J. Lutcher Stark, be well received locally, regionally, and nationally.” Both Branding the American West and The Long Shadow are available for purchase at the Stark Museum of Art Tuesday – Saturday between 9 a.m. – 4 p.m. Please note the Museum will be closed for the holidays between December 24, 2017 and January 1, 2018.About the Stark Museum of Art 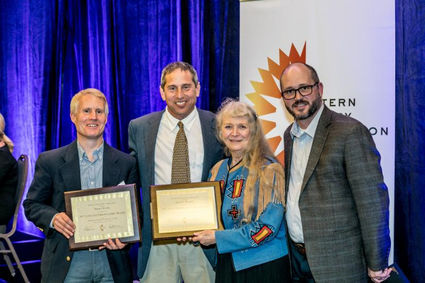