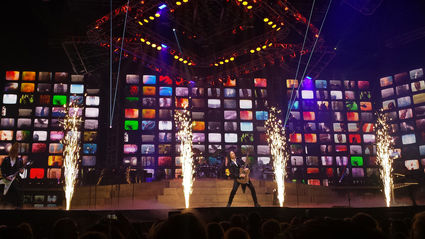 Trans Siberian Orchestra will perform two shows at the Toyota Center on Thursday, Dec. 21, as the group treks across the United States for its annual holiday run. Tickets are available at http://www.houstontoyotacenter.com.

The 2017 Trans Siberian Orchestra annual Christmas tour is a just a little less merry this year following the passing of its founder.

Paul O’Neill, the man who deservedly receives much of the credit for the creation of Trans Siberian Orchestra, died unexpectedly in April of this year after dealing with chronic illnesses.

Guitarist and band leader, Al Pitrelli, knows how important O’Neill’s legacy is and how much TSO means to so many people and expressed as much in a recent telephone interview as the group continues its “The Ghosts of Christmas Eve” tour through Dec. 30.

TM: A lot of people who never met Paul (O’Neill) do not realize how generous and friendly he was, as well as talented. In your opinion, how would you describe him and how instrumental he was to TSO?

AP: Paul was definitely one-of-a-kind. He will be greatly missed, not only by his family and friends and the band, but by fans around the world. Without Paul, there would ne nothing. TSO is his creation. He had it in his mind where he wanted this band to go when he had the vision and he has guided this ship since day one. Now it is our job to keep it going.

TM: What is TSO doing on this tour to honor and celebrate Paul’s legacy?

AP: Everything we do on this tour is about Paul. We pay our respects to him at every show because we know how important he was to everyone, fans and band included.

TM: Paul’s stories start out bleak but always end on a happy note, but real life is not so kind.

AP: Everything can change in the blink of an eye and you are never prepared. (Paul) said once he wants his music to live forever, and that is what we want too. Life punches you in the face sometimes, and you have to get back up and keep doing what you have to do. It’s important to do that for everyone.

TM: It seems the TSO line-up changes slightly from year-to-year, for one reason or another. With that said, what is it that keeps some members coming back nearly every year, such as vocalist Jeff Scott Soto, and attracts others to join, such as Houston-native Blas Elias (formerly of Slaughter and currently of Blue Man Group) this year.

AP: Once you get good chemistry, no one wants to mess that up. Jeff sings like no one else, and he has been a part of Trans Siberian Orchestra for 10 years now, and I’ve known him for, like, 30 years. He’s a great guy and a great singer and he loves being a part of TSO. Blas got involved this year because we had an opening for a drummer. We knew of Blas from Slaughter and we wanted to see how he would fit in, and he has been a perfect fit since day one. We’ve been having a great time on the road with him and he’s just a tremendous musician.

TM: In your opinion, what is it that continues to make TSO so appealing to people of all ages and backgrounds? Why does the band and its music resonate so strongly with everyone even after 20 years?

AP: It’s a lot of things really, but especially Paul’s stories. Everyone misses someone around the holidays, so Paul’s stories resonate. Everyone just wants to be around the people they love, especially this time of year. That’s the biggest reason. But other people love the show itself, the production. It’s the biggest show on the planet. You can’t not enjoy this show, and it is so much more over the top this year. We know that is just the way Paul would have wanted it to be.

Visit http://www.trans-siberian.com for more information on the band’s tour and its music.