Nearly 80 years after being at the center of a momentous time in the history of Orange, Ruby Parks had a front-row seat for local history’s latest chapter.

As Tropical Storm Harvey dumped inch after inch of rain on Orange Aug. 29, the 94-year-old widow was rescued by boat from her two-bedroom home near Northway Shopping Center as floodwaters rose.

“I’ve been blessed my whole life, but I found out since Harvey just how much my kids love me,” she said recently.

After a nearby niece helped her to dry land, Parks’ son Boyd came from Port Neches to gather what keepsakes he could and take charge of the house.

Then Ruby moved to Virginia for a short time, to live with daughter Lynda and her family. Meanwhile, Boyd and his wife found Ruby found her a new place to live, in an Orange retirement community.

The two groups were inexplicably connected in Parks’ life.

So, too, was the year she spent in the Hormel Girls Drum and Bugle Corp.

Sponsored by the Hormel Meat Company as a way to employ women military veterans after the war, it was a very competitive outfit when Parks belonged, though it would later evolve into more of an advertising vehicle for SPAM and Dinty Moore.

“George Hormel was a big Legionnaire and he put us up in a college dormitory in Connecticut all summer to learn a new routine,” she said.

As a teenager, the fourth of Charles and Ida Boehme’s five children played the bugle, herald trumpet and glockenspiel in the Bengal Guards, the Orange High showband conceived and paid for by local timber and oil tycoon Lutcher Stark.

Stark had hired Elizabeth Smith “Smitty” Hustmyre away from a job directing the Port Arthur Red Hussars drum and bugle corps. He bought uniforms and instruments to start the outfit in 1936.

“He spent a lot of money,” Parks recalled. “We went to the Sugar Bowl [in New Orleans], and he chartered a special train to take us to Chicago for the Chicagoland Music Festival and we stayed at the Stevens Hotel.

“That was something for us small town girls to be pampered and taken on a trip. Most high school activities were restricted to around town. But we went on trips.”

The Bengal Guards graced the cover of Life Magazine in 1940.

And Parks was recruited to join the Coast Guard band.

But by the time she obtained her mother’s permission to enlist, on her 20th birthday, the band slot had been filled. Ruby came out of basic training as a twice-promoted yeoman, the military’s term for an office worker.

She was stationed some in Port Arthur – that’s where the Guardsmen who were working on the LSTs taking troops in to beachheads came for shore duty – but mostly in New Orleans.

“I was in the Eighth Naval District Headquarters in New Orleans, in the supply division,” she said.

Parks’ four brothers, Leroy, Lawrence, Charles Jr. and “Skeet” all were in the military during World War II, two serving in Europe, two in the Pacific.

A 1945 front-page newspaper story featured photos of all five Boehme siblings serving their country, but Ruby admits she never made much of her military service until recent years.

“The boys did not talk about their experiences,” she said of her brothers. “I know Leroy was at Normandy on D-Day plus 6, but he never talked about what beach he was on.

“Charles was with Patton, but he never talked about the war when he got back.

“They just didn’t talk about it. I didn’t feel like I was a part of that, because I didn’t have to see the fighting.

After her year with Hormel’s drum and bugle corps, Parks went to college at Adelphi College in Garden City, N.Y. to study music.

But she only got to stay a year because her father died.

“I came home to help take care of Mom,” she said.

She went to work for Consolidated/U.S. Steel and met her husband, B.W. Parks.

They married in 1957, built their house on N. 16th Street in 1963 and by 1966, Ruby was back at work, this time in the offices of the Equitable Bag Company. She became active in the National Secretaries Association for a couple of decades before retiring in 1988.

B.W. retired from his job at Jefferson Chemical in 1989 and the pair traveled from coast-to-coast and Canada in an RV, seeing numerous national parks along the trail.

Doctors found a small spot of cancer in Ruby’s lungs earlier this year. 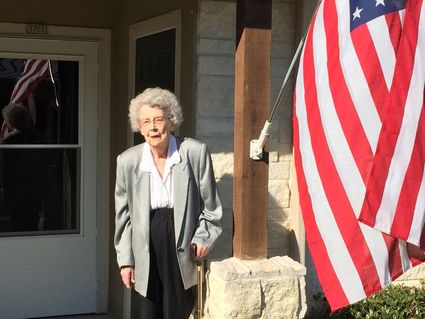 “Thank goodness it was small,” she said. “They did radiation and right before Harvey hit, they gave me the all clear.”

Since Harvey, Parks has not been back to see her home of 50-plus years.

“I did not want to see it like that,” she said. “I turned it over to [Realtor] Debbie Hughes.

“Luckily I kept up my flood insurance. That’s what made it easy for me. Boyd said the adjuster and the insurance company were generous, so thank you, Lord.”