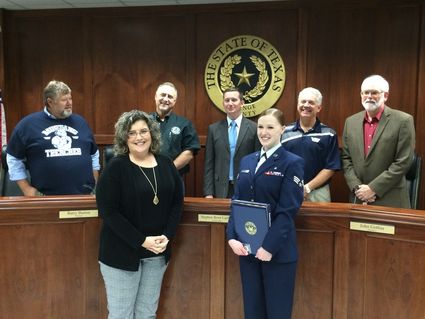 A mother’s concern over the health of her child took Katie Dial Cogbill away from Orange County. The twists and turns of that journey brought her in front of Orange County Commissioners’ Court Tuesday.

She returned as Senior Airman Katie Mae Cogbill, who was named Airman of the Year for the U.S. Air Force’s 19th Airlift Wing.

“As a member of the Air Force also, I know they don’t just give these awards out,” County Judge Stephen Brint Carlton, a major in the Air Force Reserve, said.

“It takes a lot of work, especially to win at a wing level. So, congratulations.”

Commissioners and the Judge unanimously approved a resolution to honor her.

Cogbill, 28, the daughter of Vickie Scales and Wayne Dial, graduated from Bridge City High School in 2008 and married Daniel Cogbill.

Their son, Barrett, was born in 2010, and was diagnosed with autism about a year later. The couple sought the best treatment for Barrett and decided what Orange could offer wasn’t enough.

“We just didn’t feel like he was getting the resources he needed here,” Katie said, “and I have a cousin who was in the Navy, who also has an autistic son, who got really good resources for her son.

“That’s what really made me think, ‘OK, the military might be the way to go.’ And it turns out that it really was.”

She earned an advanced certification in pediatrics in 2015 and was most recently responsible for patients at the Women’s Health Clinic at Little Rock [Arkansas] Air Force Base.

She has won the Air Force Outstanding Unit Award, the Air Force Good Conduct Medal. She was honored last week in the U.S. House of Representatives by Congressman Brian Babin for being named Air Force Medical Service Aerospace Medical Technician of the Year for Air Medical Command.

“It was all really based on my son,” she said of a military career that has her headed to a new assignment at Malmstrom Air Force Base in Great Falls, Montana.

“The medical world is something I’ve always wanted to be in, anything medical-wise,” she said. “I am planning to try to get into a nursing program through the Air Force where I’ll be able to come back, commissioned as an officer, and be a nurse in the United States Air Force.”

A light agenda at the final commissioners’ court meeting of 2017 saw the county leaders agree to spend $8,400 on an electronic cell-check system for the Orange County Jail.

Sheriff Keith Merritt said it will integrate with a current computerized jail control system and meet the requirements of the “Sandra Bland Act” passed by the state legislature.

He said the first vendor he checked prices with wanted more than $50,000.

“It [$8,400] seems to be a very reasonable price for what we’re getting,” Commissioner Barry Burton said.

Merritt also submitted for the court’s approval a contract for psychiatric services with Edward Gripon of Beaumont, but no action was taken. Commissioner Jody Crump asked to delay the vote until the Jan. 2 meeting because Crump hadn’t had time to look it over.

Commissioners also agreed to extend the county’s debris-hauling contract with AshBritt Inc., for 90 days past its Dec. 31 expiration.

The county is beginning this week the removal of hazardous waste and e-waste, the Emergency Management Department announced via news release.

The final stages of Hurricane Harvey-generated storm debris has a projected completion date of Jan. 14.

For assistance with debris-related questions, call the Orange County storm debris hotline at 409-745-9809. It is manned from 8 a.m. to 5 p.m. Monday through Friday.

Orange County landfill will be open for citizen drop-off of storm debris from 8 a.m. to 5 p.m. Monday through Saturday through Jan. 13.