Dallas has been there every step

Only a few Mustangs have been to state all four years.

Senior Chad Dallas happens to be one of the few that has, although his first two years, he went as a ball boy instead of the kicker he is today.

Chad played football growing up with little league and also in middle school, however, when he got to high school, he decided to focus on baseball, quitting football.

“I’ve been in the off-season program every year,” Chad said. “I figured if I quit and focused on baseball then I would get a lot better, but I missed it too much.”

During the play-offs his sophomore year, he decided that he wanted to play with his brother Jack his last year. He had kicked off during his younger years, but had mostly played defensive end, linebacker and some quarterback.

“We really didn’t have a main kicker,” Chad said. “We were using our position people for that.”

So Chad settled on working on being the kicker.

“I worked out with Coach Tyler Thibodeaux, who is a former player and I watched lots of YouTube videos,” Chad said.

His junior year he did kick-offs and extra points while brother Jack was the punter. But Jack graduated and the punting duties soon fell to Chad.

“Tyler wasn’t a punter so he didn’t want to help me because he was afraid he would mess me up,” Chad said. “And Jack didn’t help. My dad knew a little so it was back to the YouTube videos to learn how.”

Chad averages 38 yards a punt with his longest punt being 61 yards. And he isn’t the normal punter or kicker. He wants to be the first one to hit the kick returner.

“Kicking and punting is 50 percent mental and 50 percent physical,” Chad said. “If you miss one, you have to erase it from your mind before the next one.” 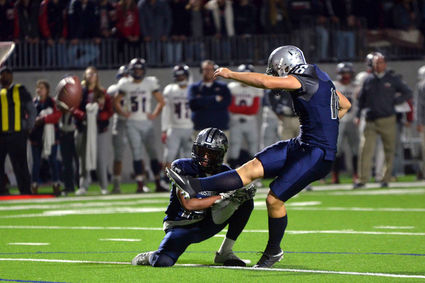 Chad was surprised a couple of weeks ago when he was offered by Texas State as a preferred walk on to kick.

“I knew that they were here to see Jarron (Morris) but I didn’t expect them to talk to me,” Chad said.

Chad has already signed a letter of intent to play baseball at Panola College in Carthage so he will have a decision to make in the coming weeks.

But as for now, he is solely focused on one thing-helping the West Orange-Stark Mustangs bring home another State Championship.