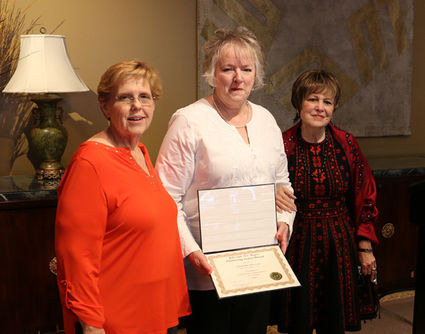 Bridge City native Charlotte Chiasson retired from her job at Lamar State College-Orange with the close of the Fall 2017 semester.

But no one expects her to end her years of giving back to her hometown.

“I’m going to miss her, but I know she’s going to continue to step forward and do a whole lot of things for her community,” Gwen Whitehead, LSCO Vice President, said last week, when Chiasson was presented the Julie and Ben Rogers Community Service Award.

The presentation was made in a short ceremony Thursday, Dec. 14 at Lamar University in Beaumont.

The Rogers Family set up an endowment in 1979 to annually provide a $1,000 cash award to a member of the Lamar University faculty or staff who made a significant contribution to public service in Southeast Texas. The award was expanded a decade later to recognize four annual winners, one representing each of the four regional campuses carrying the Lamar name.

Regina Rogers, daughter of the couple who spent their lifetimes sharing their wealth by giving back to their community, saluted the 2017 award winners as “very, very worthy of being recognized” and “people who are giving of themselves to the community in addition to giving to the schools.

“You’re spreading love in your community and making a difference,” Rogers said. “The transformational differences from your acts of goodness and kindness and your acts of commitment and dedication were extraordinary.”

Charlotte Schexnider Chiasson is a Bridge City High School grad. She spent 15 years working for the Bridge City Chamber of Commerce before going to work for Lamar State College-Orange, where she served as administrative assistant to Suzonne Crockett, Director of Education, Mathematics and Leisure Learning.

Chiasson was a charter member of Friends of the Bridge City Public Library, a group of citizens who raised money to build the city library, which opened in 1991.

A recent project more than doubled the library’s size, one that required nearly $200,000 and a decade of fundraising.

Chiasson donated proceeds from the sales of her 2016 book, titled “The History of Prairie View-Bridge City,” to the building fund.

The book was the result of years of interviews with early residents of the area, which was not called Bridge City until 1941.

Chiasson was named Bridge City Citizen of the Year for 2016.

“I am so honored,” she said at Thursday’s ceremony. “And, of course, I work at the best campus in Southeast Texas, Lamar State College-Orange.”

Chiasson, one of 11 children in her family, shared her award with her family, especially her six sisters, five of whom attended the event.

“As a community volunteer, I always ask my sisters to volunteer with me, because they’re the only ones I can count on,” Chiasson said.

Whitehead, who pinch-hit for LSCO President Mike Shahan after he was delayed because of an auto accident that shut down Interstate 10, said the Lamar State family will miss Chiasson.

“It’s kind of bittersweet for me to be presenting her this award. For as long as I can remember, Charlotte has been at LSCO. She’s always been somebody I knew I could call on and ask a question of.

“In the community, Charlotte has served that same kind of role.

She’s done numerous things … The thing I really want to sing her praises for, something that’s near and dear to me as an old English teacher, Charlotte is committed to not just her job but also to giving everybody else the gift of reading, the Bridge City Public Library.

“We’re very proud of her for that.”