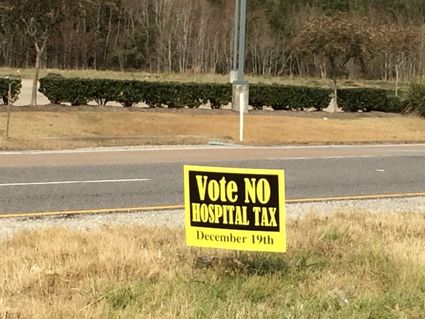 Orange County voters hated the idea of a hospital district even more than they loved Donald Trump last year.

Eighty-three-point-five percent of the voters in Tuesday’s special election rejected the measure to form a hospital district that would have authority to levy taxes.

Only 16.5 percent of the 7,600 voters marked their ballot in favor of creating a process supporters say is necessary in order to gain better medical care for Orange County, the largest county in the state without a hospital.

Orange County voted 80 percent in favor of Republican Donald Trump in the 2016 presidential election. However, there were nearly 32,000 voters in that one.

Stephen Lee, president and CEO of First Financial Bank-Orange, was a signer of the petition that forced the election. He’s not giving up on bringing a new hospital to the county.

“I think the conversation is alive and well, and there’s a great deal of interest,” he said. “There’s a lot more people who want a hospital in Orange County than those who don’t.”

There is already talk of submitting another petition after reworking the terms of the original vote – lowering the taxing ceiling from 18 cents per $100 valuation, maybe not making it county-wide.

“There’s a group out there that wants to come back at a zero tax rate, and that would create some incremental Medicare and Medicaid funding that doesn’t exist today,” Lee said. “But it would not give us the public investment that a lot of private hospitals are looking for before they will invest in your community.

“I don’t know what the right number is. I’ve heard a lot of people say, ‘Should Vidor be included? Should Bridge City be included?’ I think we can all get in a room over the right geographic and financial breakdown.”

Asked about the possibility of supporters putting forth a new petition for another election in the near future, Covey first said it was not likely.

“I don’t think anybody would be foolish enough to do that,” he said.

“Maybe if they talk to more people and have more answers and can get more people on board,” Covey said. “I’m always willing to sit down and talk to Ross Smith [the most visible hospital district proponent] or whomever and look for ideas that will for work for all, to keep working with all parties for a solution.”

Half of those were at the Bridge City and Vidor boxes, where the close proximity of hospitals in Port Arthur and Beaumont undoubtedly makes an Orange County hospital less of a priority.

Early voting margins were nearly identical to the final tally, 16.24 percent in favor with 83.76 percent opposed.