Sheetrockers Chad Lambert, Brent Ballard and Michael Clark have made Southeast Texas their home away from home since Tropical Storm Harvey went and flooded homes up and down the coast.

But on New Year’s Day, the Mississippi men were partaking in an old tradition at a new place.

They got their 2018 started with some “good luck black-eyed peas” at K-Dan’s in Orangefield.

“We’ve been trying to get over here. We just happened to get here on New Year’s Day,” Lambert said. “This is awesome.”

“We’re starting New Year’s off right,” Ballard said. “Those burgers have been getting old.”

The three men all hail from Monticello, Miss., which is about an hour’s drive south of Jackson. They’ve been living in a trailer park in Beaumont but they’re spending more and more time on Orange County jobs, Lambert said.

“We’ve worked from Galveston all the way to Orange,” Lambert said. “We’ve got a couple of jobs going on over here, and I came by here [K-Dan’s] a couple of times yesterday. But there wasn’t time to stop.

“We were kind of wondering when we’d stop and eat here. I think we’ll be eating here a lot now.”

K-Dan’s offers Orangefield residents and workers like Lambert’s crew a little bit of everything.

“We’re unique,” says Kenneth Smith, co-owner and the K in K-Dan’s. “We’re somewhere between a supermarket, a superette and a convenience store all in one.”

You can buy groceries or gasoline or have a great sit-down meal all under the same roof.

“We built it from the ground up in 1999,” Smith said. “At the time, Orangefield hadn’t prospered to what it is now.

“This has become a community gathering place. That’s what we wanted it to be. We’re a community oriented store.”

Smith says what has become two dining rooms that will seat a combined 150 for meals began with five stools overlooking a wall counter.

“We wanted to bring some goods and services that the community hadn’t had before,” Smith said.

It’s an old southern tradition that eating black-eyed peas on New Year will bring prosperity. So the Mississippi men know what they’re doing.

“We’ve had black-eyed peas on New Year’s Day or whole life,” Lambert said. “Our families cook it every year.

“It’s really a thing we do in Mississippi.” 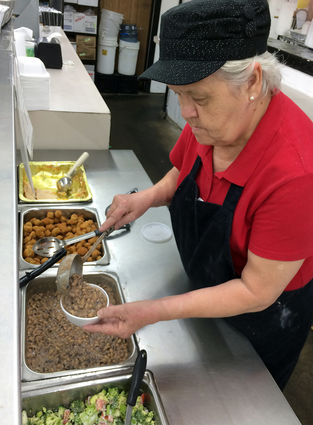