They call Tennessee the Volunteer State.

But the volunteers who are in Orange this week also answer to Tigers and Blue Raiders.

They are donating a week of their semester break to rebuild Orange homes flooded last summer by Tropical Storm Harvey.

“The holidays are the best time to get work done,” Kayleigh Caldwell, a student at the University of Memphis, said.

“We don’t have any homework to do,” said her schoolmate Trevor Cara. “It’s time to get some real work done.”

The two were among a dozen students from the University of Memphis and a handful of adults representing Memphis’ Baptist Collegiate Ministry at work this week helping an elderly woman put her north Orange home back to normal.

“It’s a mission group for the Southern Baptist Church,” explained Doug Clark of Kingsport, Tennessee, one of the adults with the group. 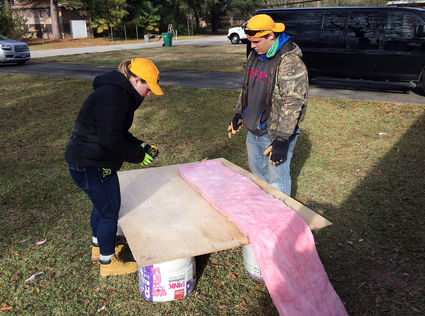 The students and the adults with them are staying nights at the Navy barracks at the Port of Orange, from which the Texas Baptist Men has coordinated this Southern Baptist Convention Disaster Relief Effort.

“The first stage of the relief was the muck-out,” Clark said, referring to the earlier volunteer groups that stripped flooded homes of water-soaked Sheetrock and insulation.

“We’re coming back to replace it, what we call the ‘rebuild.’

“The materials are all donated. All the labor and transportation is provided for us by the volunteers. Nobody will come behind us to ask for donations or anything.”