Waterfowl hunters finally get some help

Local waterfowl hunters got a late Christmas gift as the coldest weather our area has seen in quite some time came roaring into our area and decided to stay a while. Ahead of the artic blast was a strong push of ducks and geese from the north which helped to regenerate the hopes of local hunters. The numbers of birds that showed up ahead of the front were impressive and also much needed. The birds that have been staying in the area have been super spooky and tough to decoy for much of the second split. The crazy thing about the new birds is the number of green winged teal that have appeared, in some areas it feels like September’s early teal season instead of January.

Along with the help from the weather we have also been fortunate to get a big bright full moon to help usher in even more birds. The bright nights are some of the biggest help to migrating waterfowl as they will travel greater lengths during these times. The combination of the full moon and extreme cool weather will be nothing but a help to hunters all along the flyway. The northern part of the state is covered up with birds and they should continue to show up in our area until the end of the season.

I recently made a road trip to Oklahoma ahead of this most recent cold spell and saw the migration happen first hand.

Each day we hunted we saw more and more new birds show up in our area of the state.

The Canada geese and mallards really poured in two days ahead of the big front and that made for some fantastic hunts.

On several occasions we had to bust ice to open water up for the ducks to land.

All the work involved with was rewarded with a constant flow of ducks each hunt as they literally fought to get in the open water.

Dealing with temps in the teens and low 20’s is a different animal so it helped that we were prepared for those tough conditions.

One hunt the conditions just got too cold for her and I’m glad I took her back to the truck when I did because it was truly harsh out there.

No duck or goose is worth putting your dog in danger so be aware at all times.

The final month of the season is shaping up to be a good one so don’t give up yet.

The slow conditions for the past few weeks has been more than enough to cause a few hunters to pack up their gear and either go back to chasing deer or fish.

I know my second split here locally has been tough on me and my hunting partners but it appears we may get some help going forward.

The second split may call for some different tactics so be flexible and don’t be afraid to change things up. 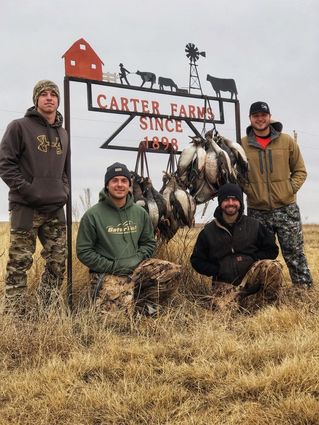 Hunting smaller potholes with fewer decoys and softer calling is a start. Most of the big groups of birds are resting on vast open water so it’s hard to hunt them in those conditions.

Extra scouting will be a must so put in your time and don’t rule out anything because you may be rewarded with a hidden gem.

If all else fails get on the road and go find some birds. A short road trip down the Texas coast or north to the panhandle will really be an eye opener if you’ve never been up there. The population of birds in these places is a sight to see and hunting a new area is always a nice way to break up the monotony. Regardless of where you hunt be safe in the cold conditions and always let someone k now where you will be. Some of this weather is colder than you may expect so enjoy it but also respect it.