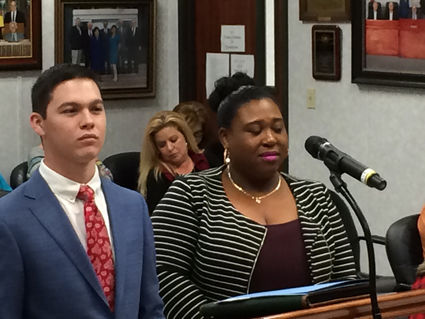 With three opponents standing between him and re-election this year, County Judge Stephen Brint Carlton took another try Tuesday to set the record straight about last month’s Hospital District Election.

Not his fault, he said. Not the fault of Commissioners’ Court, either.

“The hospital district election came about as a petition of the people, which they have a right to do by state law,” Carlton said.

“Nobody can stop them from doing it. This commissioners’ court has no power to stop them. If they turn in a valid petition, we, by law, must call for an election as stated in the election code.

“We don’t have a choice in the matter, in case anybody was unfamiliar with the matter.”

Carlton’s remarks came at the end of the weekly commissioners’ court meeting, in response to a complaint during the citizens’ comment section that county leaders “spent a lot of money on an election you didn’t need to spend.”

The petition, which called for creation of a county-wide hospital district, was submitted by a group of civic leaders calling itself Care for Orange County.

It overwhelmingly failed in the Dec. 19 election, with 83.5 percent of the 7,600 ballots cast voting “No” to the measure which would have created a new taxing entity.

Both of the other two commissioners’ court members running for re-election, Jody Crump and Barry Burton, have drawn opponents also.

Some of those seeking to win spots on the court have blamed Carlton in particular or the court in general for staging the expensive election.

For his part, Carlton went out of his way in his 2017 year-end State of the County report he issued a couple weeks ago to distance the court from the election.

“I think there’s just a lot of misinformation that continues to get perpetuated -- certainly through social media -- that the commissioners’ court is the one who just decided to call an election and just decided to spend money when that’s by law something that we have to do,” Carlton said after court ended Tuesday.

“We hear a lot about how we have to represent everybody in the county, and we do. People brought in a petition. By law, we called an election like we are required to do.”

Headlining Tuesday’s court action was a complicated 4-1 vote to authorize County Attorney John Kimbrough to offer more than the starting salary to a new hire to become legal counsel for commissioners’ court. Per the motion, after Kimbrough makes an offer and makes the tentative hire, the salary must then be approved by the court.

That new assistant county attorney would replace Doug Manning, who is retiring Jan. 26 after more than two decades in the role.

Commissioners had discussed in a November workshop the possibility of retaining the services of an outside attorney to represent their interests but appeared to rule that out with their vote Tuesday.

Crump voted the only no vote to allowing Kimbrough flexibility. The commissioner made it clear in later remarks he was not happy with the county attorney’s lack of response to inquiries.

“When we had originally discussed that before, I had asked Mr. Kimbrough some questions and he didn’t have the answers,” Crump said. “He said he would get them for us.

“Then I had waited a while and I sent an email to Mr. Kimbrough and inquired about those same things.”

Crump said he never got an answer from Kimbrough pertaining to how Manning’s time was divided between commissioners’ court and other duties for Kimbrough’s office.

Manning said he spends “about 20 percent” of his county time advising commissioners’ court and the rest on “duties required by the county attorney’s office.”

He said that Kimbrough should be granted an exemption to the Orange County pay matrix.

“You’re not going to be able to hire anybody at starting pay with any idea what they need to do,” Manning said. “You need someone to come in here with some experience.”

Commissioners also voted to raise the pay of Sabrina Gray, director of the county’s Expo Center, after she added responsibilities for the parks department.

They set aside $40,000 for a new panic alert system for the courthouse and they authorized the Greater Orange Area Chamber of Commerce to use the courthouse parking lot for the Feb. 2-3 Mardi Gras parades.