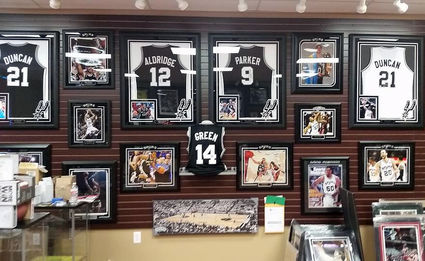 How do you know when your dream job isn’t just a dream?

For Don Bonnin, that ah-ha moment came when he found himself opening a business out of self defense.

“The only reason I have a store is because I needed my house back,” the Orange native said from his San Antonio sports memorabilia store, Gallery of Champions.

“Charities were sending people to my house to pick out stuff for auctions. I figured the easier way was to just open up a store where they have all the room they need to look and decide.”

For the third year in a row, those coming to the Jan. 22 Taste of the Bayou banquet put on by the Bridge City Chamber of Commerce will have a chance to “look and decide” on Bonnin’s autographed sports treasures.

His booth filled with items available in a silent auction will be adjacent to the food vendors offering samples of their specialties.

The Gulf Coast Playboys band will perform during dinner with the program beginning about 7 p.m.

Local restaurants will give out samples.

The family friendly event is open to the public. Tickets are $15 per person and $160 for a table of eight.

Topping the list of items Bonnin is bringing to Bridge City is a football signed by Tommy Nobis and Steve Worster, the stars of three University of Texas national championship football teams.

Worster, of course, is a Bridge City native who led the Longhorns to titles in 1969 and 1970, when he was an all-American running back and fourth-place finisher for the Heisman Trophy.

Nobis was an All-American linebacker for UT, who led the Longhorns to the 1963 title. The San Antonio native was the first draft choice ever for the Atlanta Falcons. He died in December at age 74.

And if you’re not a Longhorns fan, how about World Champions?

Cowboys fans can choose from a jersey signed by Dak Prescott, a football signed by Bob Lilly, or an autographed canvas print of Roger Staubach.

This is the third year for Bonnin to bring his wares to the Bridge City banquet, but it’s his 10th year to offer his memorabilia in silent auctions at fundraising events.

The Little Cypress-Mauriceville grad and San Antonio resident since the turn of the century says he now books nearly 100 silent auctions a year.

“I’ve been collecting since I was 5 years old and my dad would take us to the Astrodome,” he said.

“I had a friend who was chairman of an event and three days before it was to be held, he had nothing for their silent auction. So, he just came to my house and started taking my stuff.

“I went to the event and a lot of people really liked my stuff and asked me to do their shows. I started with three or four and it has really grown from there.”

Sports memorabilia is reported to be a $6 billion a year industry.

It’s a job that comes with some interesting twists.

In order to collect the autographs, Bonnin spends a good bit of time on the road.

“I probably go to 10 different PGA tournaments a year,” he said, noting he had just returned from Tiger Woods’ tournament in the Bahamas.

It’s not all glamor and glitz.

Bonnin’s schedule for the events he goes to includes showing up early – during walkthroughs, shoot-arounds and sound checks – and staying late, until the last celebrity has showered and left the building.

Sometimes there’s even staking out hotel lobbies and such.

Also, you need something for the stars to sign.

“You can order [uniforms and other apparel] from the NFL website, or sporting goods stores might have a sale,” Bonnin said.

“Adidas lost the NBA contract and put all its jerseys on clearance. That allows me to lower the opening bid at auctions.”

With sharp-eyed customers like sports stars Michael Irvin and Allen Iverson and event organizers like actress Eva Longoria calling on him, Bonnin is always on the lookout for quality collectibles.

It’s a tough job. But somebody’s got to do it.

“I’m able to incorporate something I really like doing – going to live events – into a business,” Bonnin said.