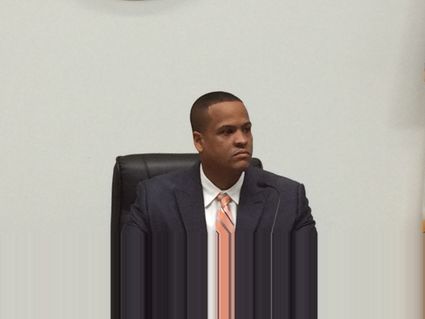 Orange will have a new mayor this year and Larry Spears, Jr., wants to be that new mayor.

Filing for the May 5 local elections began last Wednesday and runs through Feb. 16.

Spears, Orange mayor pro-tem the past 18 months, filed on the first day.

“I want to do what’s best for every citizen in Orange -- not just for my family – so I put my name in the hat,” Spears said.

A Safety Health and Environment manager at DuPont, Spears, 37, said his priority as mayor will be Orange’s economy.

“I want to find ways to strengthen our economy and attract new business,” he said.

The decision to seek the mayor’s office was not an easy one, said Spears, whose father also worked at DuPont.

“That’s not a position you just jump into,” he said. “It took me a long time to make the final decision. I sat down and talked with my wife and prayed about it for a long time.

“I always believe in putting God first. Whenever I have had a tough decision, I prayed about it. I feel like God led me to it, everything will be OK.”

Spears has twice been elected for the at-large Place 6.

A special election will be called to fill his seat since his current term had more than two years to run. Orange council members serve three-year terms.

“I know this community can turn around and get better. We’ve just got to make sure we put Him first and take care of business.”

Pete Runnels, who has backed off his announced bid to run for his second go-around as county judge, will seek re-election as mayor of Pinehurst.

Another of the county’s mayors, David Rutledge, has filed for re-election in Bridge City.

At the Bridge City school district, Marla Zoch announced last week she will not run for re-election in Place 1.

For the Little Cypress-Mauriceville school district, incumbents Tammy Rountree and Aubrey Milstead have both filed for another term.