Bridge City’s perpetual motion machine got a surprise Monday night at the Taste of the Bayou 58th annual Chamber of Commerce banquet.

Thirty minutes after Scot Shaffer, the insurance agent and local church leader who was everywhere delivering relief after Hurricane Harvey, accepted the award for 2017 Citizens Non-Profit of the Year on behalf of his group Jeepers4Jesus, he was called back to the podium.

And then, Shaffer was named the Chamber Ambassador of the Year as the event at Bridge City Elementary School wound to a close.

“He’s finally not in an elected office and ran out of excuses why he couldn’t accept it,” outgoing Chamber President Elyse Thibodeaux said.

Through social media, the non-profit expanded to include all 50 states. The organization mobilized to help after 2016 floods in Deweyville and Southern Louisiana.

After Hurricane Harvey, Jeepers4Jesus found its main purpose in obtaining and distributing 30,000 gallons of mold-remediation chemicals to treat flooded homes, enough for 7,000 houses.

Members delivered the fluid from end to end of the affected area, Rockport to Calcasieu Parish.

“It was a combination of Jeepers4Jesus and other organizations we were able to partner up with,” Shaffer, past president of the Chamber, said.

“This honor is something that goes out to every church, every organization, every individual we’ve partnered with over the last three and a half years.”

Shaffer and his wife Angel were helping open the first aid distribution centers in Bridge City long before FEMA made it to town. They arranged to receive planes and 18-wheelers full of donations and directed them where needed.

Then they worked with others under the Jeepers4Jesus banner to clean out flooded homes.

“We were fortunate enough that we didn’t flood this go-round, so we were blessed to be able to help people. It’s one of those cliché things: you get more joy out of helping people, but it’s true,” he said.

Three other entities that played and continue to play a big part in the Bridge City-area response to Harvey were recognized with the Business of the Year awards: City of Bridge City; Bridge City ISD and Orangefield ISD.

“Storms are terrible. They disrupt our lives so much,” Stephen Patterson, Orangefield superintendent, said.

“But you find the positive in all of this. They say it brings out the best in all of us. What we found was exactly that.

It brought out the best in our teachers, our kids and our businesses.”

David Rutledge, the Bridge City mayor, asked all city employees to stand, then bragged on them. 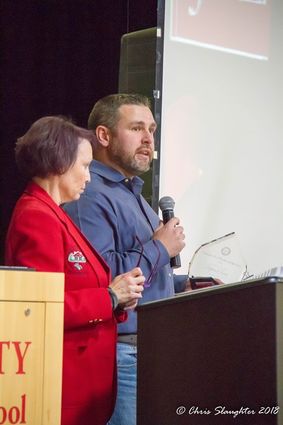 “Ya’ll don’t realize what a good job these people have done,” he said.

Brandy Slaughter named a Lifetime Ambassador. She was unable to attend due to illness; her daughter Carissa accepted the award on her behalf.

Thibodeaux passed her president’s gavel to Terri Gauthier. A City Council member in Bridge City, Gauthier encouraged any local business owners, who are not Bridge City Chamber members, to contact the Chamber to find out the many benefits of membership.