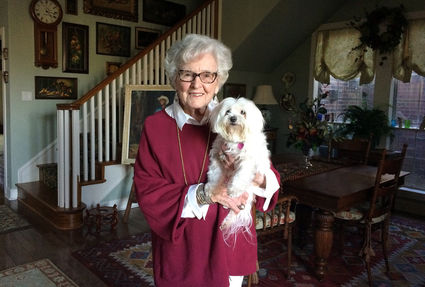 A leader in the fight for equality as America entered its third century, Marcelle Adams beat the odds and many a male opponent in her 10-year political career.

“It takes more than being smart,” she said. “You have to be nice to people.

“That could go for politics in Washington right now. You’ve got to be respectful to people.”

Adams won election to the first of two four-year terms as Orange County commissioner in 1986. She served from 1987-1994.

She is still the only woman to have served in the job.

“Beaumont [Jefferson County] has never had a woman county commissioner,” says Adams, who is going strong at 94.

Marcelle “came with the war,” she says of her debut in Orange in 1941.

“My daddy came to work at the shipyard. I was just out of high school,” she recalled. “I met my husband on a blind date and we married six months later. We stayed married 57 years.”

In between, she worked in the lab at DuPont assisting the research chemists and retired in 1981.

“Then I played golf for four or five years,” she said.

She recalls she was just back from a week of snow skiing in Colorado and her husband, Al, had brought her a morning cup of coffee when it occurred to her.

“Al had brought me coffee all my married life,” Adams said. “I said, ‘Al, I believe I’ll run for county commissioner.’”

And she did. And she finished second in a seven-person field in the Democratic primary.

She made it into a run-off with Charles McQuhae in a special election for the final two years of a Precinct 2 term. McQuhae won the run-off by 162 votes.

“I thought that was the end of my political career,” she said. “People thought I was crazy because I was running. No one really helped me but my husband and a friend who was also retired from DuPont, Winona Peveto.

“Two years later, people were begging me to run. Everything had changed.”

In 1986, Adams was one of three opponents for the incumbent, McQuhae, in the Dem primary.

She not only beat all three, including the incumbent, she did it without a run-off. Adams captured 55 percent of the vote to 35 percent for McQuhae.

(In those days, the Democratic primary winner ran unopposed in the November general election.)

In 1990, she again faced three opponents in the primary. She won the election, again, without a run-off.

Adams ran for county judge in 1994 and lost in a four-person race that included Stringer. Carl Thibodeaux was the winner; he would go on to serve 20 years as county judge.

“I was worn out from eight years as a county commissioner,” Adams admitted. “For eight years, I did everything. People were asking me to come to everything and I would go.

“I was worn out. I didn’t have too much oomph.

“Those two men [Stringer and Thibodeaux] were hot. They spent the money, and I didn’t want to.”

Adams returned home to her husband, who had retired after spending 25 years working at the Naval Station and 12 years running the dog pound.

“I was home with Al, just the two of us, for four years before he died,” she said. “Those were wonderful years.”

Since retiring from politics, Adams has been active with her church, first First Baptist Church of Mauriceville and now with Trinity Baptist of Orange. She plays bridge regularly.

“All my old friends are dead, but I’ve got young ones,” she said.

Lately, Marcelle has had occasion to recall her days as a commissioner. She recalls that “I worked for all of the employees to be treated equally; the men in road and bridge loved me because I took up for them.”

She remembers traveling to conferences with her fellow county commissioners and being one of the few women.

“There weren’t many,” she said.

But at the conferences and all, the men accepted me. A lot of the men at that time would stay in the happy [hospitality] room and I was taking all the classes.”

She said she never was sexually harassed in the workplace.

What’s causing Adams to look back on those days is the fact that her daughter, former Orange city council member Theresa Adams Beauchamp, is running for her old job as Precinct 2 commissioner.

If the woman Adams calls “Teesie” wins, she would be the second female county commissioner in Orange County history.

“I think she can do the job. She’s had 11 years with city government, which I hadn’t had,” Adams said.

“If I didn’t think Orange County needed a change, I certainly wouldn’t have wanted her to run. But I’m going to help her any way I could to get her elected.