Cutline: Curt Block of Orange, who lost his right arm to cancer in 2012, looks over some of the cutting blocks he has built for customers of his woodworking business.

Curt Block of Orange has one arm, one kidney and one heck of a sunny disposition.

“I was lucky. In fact, I lucked out on every one of them,” Block says of a series of hospitalization and health emergencies that have kept him battling back since 2012.

Today, Block is waiting on the arrival of business cards for his Curt Block’s Creations while busily turning out wooden porch gliders, tables and cutting blocks as the rate of one or more per day.

Block is no stranger to carpenter’s tools. As the owner of Triangle Roofing and Remodeling, he did a lot of climbing ladders and roofing.

“I did a lot of roofs, and they’d call me out for anything,” he recalled. “I did plumbing and electrical.”

He also built lots of cabinets for people, redid bathrooms and even built the house he and his wife Shirley live in now.

“But that was when I had two arms,” he said Tuesday morning.

Block found out he had cancer when he high-fived his son Steven after a Dallas Cowboys touchdown and his right upper arm snapped in two.

“Cancer had eaten all through the bone.”

Cancers have taken their bites out of Block. Sarcoma, carcinoma you name it.

In 2012, doctors had to amputate his right arm at the shoulder.

They found cancer had spread to other parts of his body and they removed a kidney.

“I was in the hospital for months, in the ICU for 17 days,” he said. “They got rid of the cancer, and I was happy about that.”

The cancer showed itself again, in Block’s lungs, necessitating chemo treatments. There was dialysis for his remaining kidney.

“That [dialysis] was the worst. But the doctors said I don’t have to go any more,” he said.

A year ago, Block said, he had surgery to remove his gall bladder and appendix and was in a coma for four days.

“They didn’t think I was going to make it. They’d called in the family,” he recalled.

“And after that stay in the hospital, they didn’t think I’d walk again. But I went to rehab and now I can walk real good. I can stay on my feet all day.”

The good news is Block has always been left-handed. And he discovered modern woodworking clamps that can be tightened with one hand.

“Clamps made the difference,” he said. “Without them, I can’t build nothing. They cover for my other arm. I can’t drive a nail [because] I can’t hold a nail to drive it, so I use those [nail] guns and lots of screws.

“My attitude is through the roof. I’m very happy.”

One thing that causes Block to do flinch, a bit, is a question about his left-handed guitars.

“I have three of the finest guitars you’ve ever seen over there,” he said, wistfully.

From about age 17 until the onset of his health woes, Block was lead guitarist and singer in a succession of bands, the Vibrations, the Velvets, the Shanes and, with his brother Steven, the Block Brothers.

“I sang around here all of my life, at all of the nightclubs,” he said. “I really had a good career. I didn’t make any money or get famous, but I was famous around here.

“I even sang after my arm was off at my benefit dance.”

“If I wanted to get back into it, I could. I can still play the bass,” he said.

Block, who sent all four of his children – Gina, Lori, Angie and Steven – to Bridge City schools, said it was Steven who got him to rediscover woodworking after his hospitalizations.

“He said, ‘You never did build me a glider. Now he’s got three gliders. I took care of everything that everybody wanted,” Block said.

“I’ve got gliders all over the country now. I sell them to everybody, all through word of mouth.” 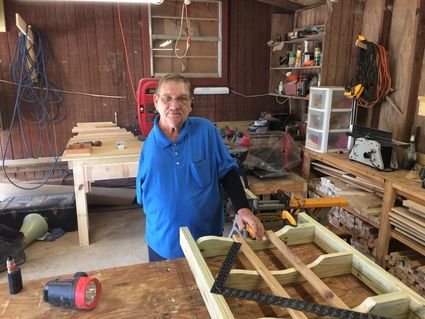 “I just had to have a hobby. I never thought I’d make money at it,” he said. “If anybody wants me to build something, all I need is a picture and measurements.”

Let somebody else sweat the future.