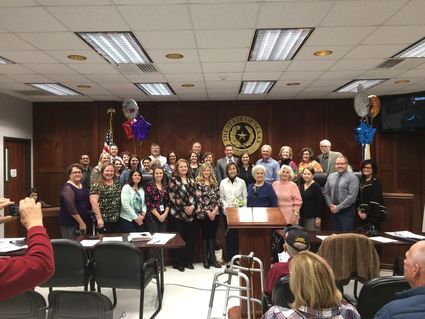 Jefferson Energy, the little plant that could on the west side of the Port of Beaumont, presented Orange County with checks totaling $2.5 million Tuesday.

Then, after okaying payments of $3.4 million for debris removal from Hurricane Harvey they expect the state and federal government to reimburse, commissioners pondered a “perfect storm.”

It all started with commissioners debating the best way to utilize county road-and-bridge workers.

Commissioner Johnny Trahan proposed that the resume and continue open-ended the post-Harvey policy of having the county landfill open from 7 a.m. to 5 p.m. Monday through Saturday for free to home and business owners with storm debris.

Commissioner Barry Burton pointed out that road-and-bridge personnel were needed as the county races a Feb. 10 deadline to find, review and list all Harvey-related road damage in time to secure government reimbursement.

Commissioners John Gothia and Jody Crump joined the first two when the discussion turned to debris pickup, and all agreed there was much debris still in needs of clearing.

Gothia referred to last weekend’s record rains of 6 to 10 inches and the flooding on roads and into some homes that it caused.

“We’ve had three historical events in the last six months,” he said, adding Saturday’s runoff to the June flooding in north Orange and Harvey, which was the biggest four-day rainfall event in U.S. history.

“Debris is clogging our culverts. All it takes is one piece of Sheetrock and some tree limbs to block a drain,” Gothia said.

“Mother Nature’s not playing fair. She keeps raining on us and we keep having to clean it up. We get it all cleaned up and it’s right back in those ditches again.

He adovicated working with the city governments of Orange County as well as Texas Department of Transportation and the Orange County Drainage District to get a plan.

“We’re going to get it done,” he said. “We’re going to work with other agencies and our other groups around here so that we can come up with a plan to stay on top of this.”

To all this, Ralph Valenciano, county emergency management coordinator, added his concerns that the county emergency operations center was currently being compromised because FEMA is operating a Disaster Recovery Center there, leaving it vulnerable in the face of another disaster.

“Be mindful, we’ll do what we can for potholes, but it’s going to be a big fix.”

Commissioners did agree to leave the landfill open until further notice, and to extend FEMA’s rental on the Expo Center site through the end of February, not March as FEMA had requested.

The possibility of moving the FEMA operation, which is now seeing about 20 citizens a day, to a smaller area of the Expo Center was discussed.

Commissioners announced that citizens would have until sometime after Feb. 10 to get any remaining storm debris to the right-of-way for a pickup paid for by the county.

Jefferson Energy Corporation, on the Orange County bank of the Neches west of Vidor, was created in 2012, said Mark Viator, the company’s director of public and government affairs, and helped immeasurably by a $250 million tax abatement granted by Orange County.

As he did a year ago, Viator made a presentation before commissioners’ of its 2017 schools and county taxes, along with a $125,000 payment for the original PILOT (payment in lieu of taxes) program that made it possible.

Jefferson Energy is currently transferring ethanol from railroad tank cars and putting it into a pipeline to the Port of Beaumont, where it is loaded onto ships to Asian countries. It transfers other refined products from pipelines onto railroad cars for export to Mexico.

“Some people think you gave something away,” Viator said to commissioners, referring to the abatements. “You didn’t give anything away.

“These $2.6 million checks would not have been possible without Orange County giving us the abatement,” Viator said.

More than two dozen teachers came to commissioners’ court for the proclamations by the commissioners and Rep. Babin.

Among them were two who taught Carlton at Little Cypress-Mauriceville schools, Joye Iles and Theresa Cronin.

Most of it went to debris hauler Ashbritt Environmental ($1.5 million), monitoring firm Tetra Tech ($800,000) and Waste Management ($1.1 million), the operators of the Newton County landfill, the final resting place for storm debris.

County Auditor Pennee Schmitt said there was no timetable set for FEMA reimbursement.

One is the PREPS plan, an acronym for Partial Repair and Essential Power for Sheltering. The other was DALHR, or Direct Assistance for Limited Home Repair.

More information on both can be obtained by calling 1-888-958-0877 or visiting the Disaster Recovery Center at the County Expo Center or the one in Vidor.