pic: Sherri Fruge’, above, and her husband, Jeff, were named King and Queen of the Tricentennial Celebration of New Orleans at the 2018 recent Krewe of Krewe’s Mardi Gras Grande Ball.

Sherri Fruge’ has has been involved with Orange’s Mardi Gras parade practically from the start back in 2003.

“My parents were pretty instrumental in getting it set up in Orange,” she said. “We like it for the camaraderie and the friendship.”

Saturday night, Feb. 2, Fruge’ and husband Jeff will reign over the Krewe of Krewes Parade that will highlight the 2018 Mardi Gras celebration in downtown Orange as the King and Queen of the Tricentennial Celebration of New Orleans.

Beads will fly. Refreshments will be served. Good times will roll.

The Jan. 20 Krewe of Krewes Grande Ball, a much anticipated annual preliminary to the parades, had the theme of “Famous Duos.”

Kyle and Amy Stephens dressed as Superman and Wonder Woman and were proclaimed Duke and Duchess of Justice.

Jim and Suzy Wimberly came as lead characters Danny and Sandy from “Grease” and the Duke and Duchess of Greased Lightning.

Ray and Ruth Hancock nailed the Beauty and the Beast homage as the Duke and Duchess of Villeneuve.

Paul Burch and Raul Burch were the Dukes of Siegfried and Roy.

The Greater Orange Chamber of Commerce and the City of Orange are combining to put on the two-day downtown event that will feature three parades.

At 6 p.m. Friday, Feb. 2, the Jeep Parade will take place on a parade route starting at the Orange County Courthouse parking lot. It goes west on Division to 10th Street, then north to Green Avenue, south on First Street, west on Front Street and south on Fifth to the Riverfront Pavilion.

The band “Mixx Fixxer,” a 70s Rock tribute band, will go on stage after the end of the Jeep Parade.

Saturday’s action begins with a 3:30 p.m. Munchkin Parade for the youngsters. The Krewe of Krewes Parade begins at 5:30 p.m.

Activities for children, as well as food and drink vendors, will be available. Riverfront Pavilion rules forbid bringing pets and coolers. 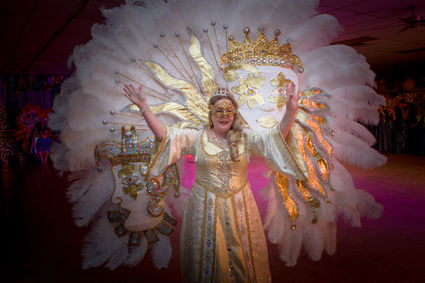 Mardi Gras krewes in the Orange celebration are made up of groups of two to three dozen friends. Each krewe sponsors and decorates a parade float.

Of the 13 krewes in this year’s event, about half own their floats while others are rented or borrowed from the Mardi Gras of Southeast Texas in Port Arthur.

“The parade is pretty involved, to get the float ready,” says Fruge’ whose Creole Krewe has been working at nights to get just the right look.

“We have new decorations every year,” she said. “We meet about once a month during the year to plan.”