BC senior rebounds for award, scholarship 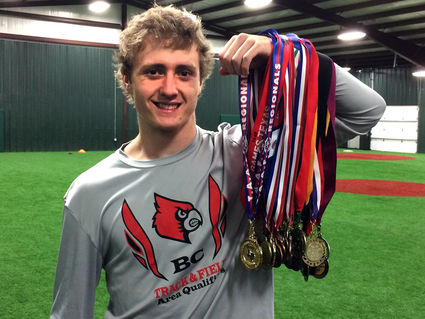 To say Hunter Denton’s senior year of high school has not gone as planned would be putting it mildly – he broke both bones in his lower leg in September and he’s been fighting back ever since.

But Bridge City’s multi-talented athlete has plenty of reasons to smile this week.

Thursday, he is traveling to San Antonio to be recognized as the 2017 Male Athlete of the Year by the Texas Amateur Athletic Federation.

Besides being All-District in football and high-point scorer three straight years at the district track meet for Bridge City High, Denton has competed in TAAF summer track meets for the Beaumont Track Club.

Last summer, he took gold in the long jump and was second in the 200 meters at the TAAF Summer Games.

That qualified him to compete in the State Games of America, held in Grand Rapids, Michigan. He won both the long jump and the 200 at that meet.

But Denton is the first Beaumont Track Club member ever recognized as TAAF Athlete of the Year.

“He‘s a hard worker; he’ll do whatever you ask him to do,” Washington said of Denton, who also ran on two fourth-place relay teams at the state meet.

Hard work made Monday another big day for Denton. It marked his first time back on the track with the BC track team.

Unbelievably, Hunter is able to run only four and a half months after surgery that required a rod to be implanted from his right knee to ankle so tibia and fibula bones could join back together.

He says he began rehabbing the day after his Sept. 19 surgery and gives a lot of credit to Scott Meyer, a “speed” coach with the Golden Triangle Sports Academy in Beaumont.

“He’s the only reason I’m running right now, to be honest,” Denton said.

His injury came in a BC football practice, as he planted to reverse direction on a “comeback” pass route.

“It hurt like someone kicked me in the shin over and over again,” he recalled.

Among his first thought were his hopes for college scholarships.

“They were down the drain early, the big ones [schools] at least,” Denton recalled.

But after surgery early the morning after being injured, Denton says, “I started walking two hours after surgery. It hurt. I was walking about a step a minute. But I was pretty dedicated.

Denton said he had worked with Meyer earlier in his career, lowering his 40-yard dash time from 4.6 seconds to 4.4.

“That was after going to him just three weeks,” Denton said.

Also on Denton’s list for thank-yous are members of the Blinn coaching staff – particularly co-defensive coordinators Chuck Parsons and Eddie Jones who recruited Denton as a safety for Head Coach Ryan Mahon’s Buccaneers.

Denton played receiver, running back, defensive back and kick returner – he was the 2016 All-District Special Teams Player of the Year – for the Cardinals.

“They [Blinn coaches] were one of the schools that believed in me after my break, so that’s where I wanted to go,” the teenager said. “They believed in me, they’re someone that’s going to play me because they know what I can do when I’m 100 percent and they’re not just having me there to have me there.

“They’re some of the nicest people I’ve met in a long time.”

As for his rapid rehab, it’s because of a goal Denton won’t let go of.