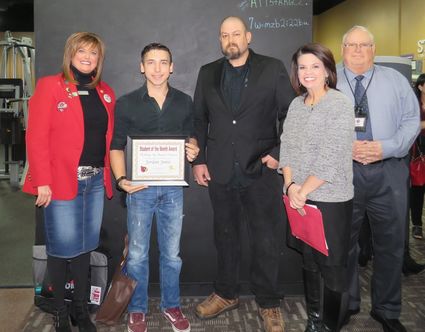 Jordan is a member of the Art Club and in community service has volunteered for Hurricane Harvey Relief and Common Ground Community Church Student Life Camp and Youth Group.

Debbie Gregg, Art Teacher and Floral Design, said, “Jordan Janis has really excelled in the art department. He received a Gold Medal for the 2018 Houston Livestock School Art Program and will be on display in the Hayloft Gallery during the rodeo. Last year Jordan won a scholarship to study art in a summer program at the Glassell School of Art in Houston and had a Gold Medal in 2017 at the rodeo. He also received a second place on his portfolio as a junior which usually goes to seniors.

Jordan is doing very well in all his classes and has done an about face with his grades since his freshman year. He is one of the most talented students I have ever taught. Jordan thinks outside the box and creates the most spectacular artwork.”

Hannah Landry, Math Teacher, said, “Jordan is an excellent math student. He is intelligent, hardworking, and self-motivated, a combination that ensures success. What a joy it has been having him in class!”

Cathy Riley, English Department Chair & Director of Bridge City Strutters, said, “JORDAN JANIS is absolutely one of my favorite students because he is an absolute gentleman with a cool demeanor and a warm heart. You see, JORDAN has a sixth sense of understanding people – a rare find in today’s society. One might see JORDAN creating magnificent pieces of art, speaking eloquently as he analyzes literature in English class, or befriending others throughout the day. He demonstrates a positive influence on others and strives for a richer existence. Without a doubt, JORDAN JANIS’s future will be rich, and those he influences will be richer for knowing him.”

When asked about his future plans, Jordan said, “I plan on joining the military and becoming and electrician.”