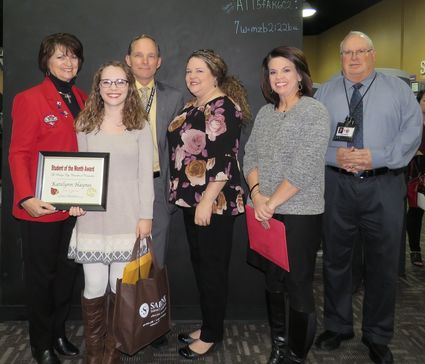 Katelynn is the daughter of Aliceson and Larry Haynes. She is ranked #10 of 197 with a GPA 4.44. Katelynn’s Awards and Honors include:

Katelynn’s Clubs and Organizations include:

Tami Goss, Director of Bands, said, “Katelynn Haynes is an outstanding student on many different levels. She is academically gifted, excels in all of the fine arts, and is a strong leader to all of her peers. She has been an assistant and co-head drum major of the band and is a very talented French horn player. Though very talented, the qualities that I respect most in Katelynn are her strong moral character and faith in her higher power that shines bright for all to see.”

Don Miller, Social Studies Department Chair & UIL Coordinator, said, “Katelynn Haynes is a very hard-working student with a great personality. One of the things that amazes me about Katelynn is her initiative to get things done. She is an extremely talented speaker which she has proven by qualifying for the UIL State Student Congress for a third year in a row. She is also involved in a number of other school activities such as the Academic Team and UIL One-Act Play. I can say that Katelynn pushes herself to do the best in whatever she does.”

Stacy Webb, Theatre/Media Communications Teacher, said, “I have had the pleasure to spend much time with Kate during the last three years, as she has been a leading factor in our school’s One Act Play.

She is an extremely talented young lady.

The very first time she auditioned for the Cardinal Theatre, she received the leading role in our UIL Competition One Act Play, “The Anatomy of Grey”.

She was fantastic, and received many awards and metals, even without formal training.

This is a testament to her work ethic, one of which is the best I’ve encountered in 16 years of teaching.

I look forward to her current role as Elsa Dowdall in “The Red Velvet Cake Wars”, her first role in a comedic production.

I have full confidence that she will create something special for her audience and cast members.”

When asked about her future plans, Katelynn said, “I plan to pursue a career in political science.”