Every day is Valentine’s for Orange couple 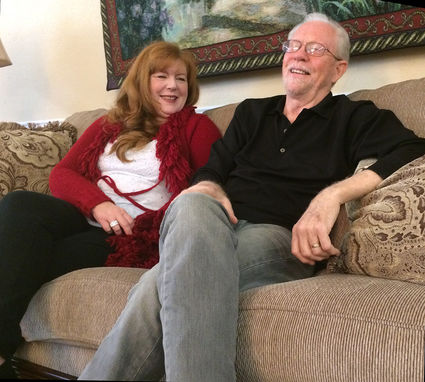 Photo: Janelle and David Allen will mark the 30th anniversary of their first date on Valentine’s Day. (Photo by Dave Rogers)

Valentine’s Day is special for Janelle and David Allen.

Wednesday marks the 30th anniversary of their first date, and they married three months after that.

But every day is special to this Orange couple.

“Really, we have a Valentine’s relationship all the time,” David said.

These two preachers’ kids from west Texas and New Mexico learned their life lessons well. When they found each other and united for what was the second marriage for each, they did it right.

“We were old enough to understand what was important, how to take care of a relationship,” David said.

“We wanted to make a point to protect and nurture the relationship.”

“We do look out for each other and what we’re going through,” Janelle said. “We cheer each other on when we’ve had defeats.”

Janelle, 65, was a single mom with four young children, two boys and two girls, when they married. David, 73, was a single father with one boy and one girl, both grown and out of the house.

Their paths had criss-crossed throughout the Assembly of God church for years. At one point, David worked to build a parsonage for a Deming, New Mexico church that Janelle’s family soon lived in.

“We’ve been involved in everything from the ground up in ministry. That’s how we were raised,” David said. “We know the joys and heartaches of church life.”

“So many of our relatives worked together in churches,” Janelle said. “My uncle had been David’s pastor for years in Roswell, New Mexico.”

“My cousin had been her pastor for several years,” David said.

The two met at an adult singles group at a church in Odessa. It wasn’t long after that they went on their first date, at a Sweetheart dinner.

“We were able to value and treasure what we have in each other,” David said, fighting back tears.

After they married, the Allens took a job with a church in Louisiana.

“We loved it,” Janelle said.

But after her father died in 2007, the Allens moved to Orange County. Janelle’s mother, Lois Owen, now 93, lived at Optimist Village. Her children, now grown, were close by.

“We got here in time to get wiped out by Hurricane Ike in 2008,” David said, noting they were living in Rose City at the time.

Five years ago, the couple also moved in at Optimist Village.

“We stay busy with the kids and grandkids,” David said. “We just joined the gym this year. We got to New Mexico and spend time with family there.

“And,” Janelle said, “a lot of our days are helping our kids get their houses back together.”

There’s one more thing they take time to do daily.

“I told her I wanted to give her two joys for every sorrow,” David said. “It didn’t quite work out that way at one point, but I think we’ve done quite well.”