What if they had an election and nobody came?

Well, from the standpoint of the Democratic Party in Orange County, that’s pretty much what happened in 2016, when Hillary Clinton got less than 20 percent of the local presidential vote and no Democrats even bothered to run for county office.

Lewis Ackerman and Marcus Wilkerson are out to change that.

“I’m just an average Joe,” Ackerman, 32, said. “I just want to do something good for my community.”

“Orange County used to be a blue county,” said Wilkerson, 36, “and now, you probably have to have an ‘R’ beside your name to get elected.

“I feel like it’s time I reached out, and tried to invigorate the Democratic Party in Orange County.”

The two candidates for Chairman of the Orange County Democratic Party will be on the ballot for the March 6 Democratic Primary that will be held side-by-side with the Republican Primary in the county’s 34 precincts.

For the primaries, early voters do not have to vote in their home precinct – any of the four county locations will do.

There are a total of nine candidates running in the Democratic Primary for the right to take on Gov. Greg Abbott in November.

Ackerman and Wilkerson are two of five local Democrats on the primary ballot, though the primary will be a formality for Deborah Mitchell and Gail Barnett, candidates for County Commissioner Precinct 2 and Justice of the Peace Precinct 1.

Mitchell and Barnett won’t face an opponent until the Nov. 6 general election. Don Brown is on the Democratic Party ballot for County Judge but his status appears to be up in the air.

Wilkerson, a graduate of West Orange-Stark, lives in Bridge City and practices law in Beaumont. He worked with computers before getting a bachelor’s degree in social work and then his law degree.

Ackerman, a Virginia native who has been in Orange since 2005, has a bachelor’s in criminal justice. He has worked in security and, most recently, as a social worker.

Under Texas law, party chairmen are elected every even-numbered year.

Deborah Mitchell had been Orange County’s Democratic Party chair but had to resign when she filed to run for county commissioner. John Baker was appointed to fill the position on an interim basis.

“My job is as a facilitator,” Ackerman said, in anticipation of winning, “to build the party, make sure we’re getting new voters, making sure we have candidates to put on the ballot.

“The biggest part of my job is going to be to rebuild the trust people had in the Democratic Party. Right now, we don’t have any trust.”

Both Wilkerson and Ackerman believe the local Democratic Party should get back to its roots and reach out to help all residents.

“We can’t be just the elitist club I feel has existed in the Democratic Party in Orange for a while,” Wilkerson said.

“There are just so many people who have so many needs I think the party could be focusing on.

“So many people in the African-American community, so many young people that could be benefiting from Democratic policies. You can’t just go with the flow; you have to be willing to bring in new people.” 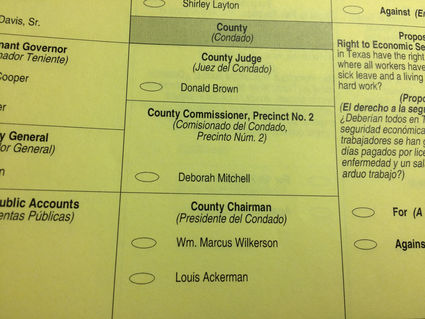 DONALD BROWN UPDATE: Donald Brown of Vidor and the Democratic Party of Orange County are disputing the legitimacy of Brown’s campaign to represent the Democrats as County Judge candidate in November’s election.

Party secretary Michael Cole first reported the State Democratic Party had ruled Brown ineligible because the check for his filing fee had bounced. Brown says local party officials prevented him from making good on that check in a timely fashion.