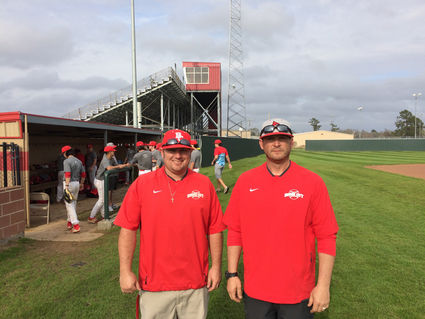 Chad Landry and Shea Landry are not related – other than being in the fraternity of Southeast Texas baseball coaches.

A year ago, their two teams combined to win 48 games with each squad advancing from the top three spots in District 22-4A to finish among the Sweet 16 Class 4A nines in the state.

Shea Landry led West Orange-Stark’s Mustangs to a state runnerup spot in 2015 then had the 2017 team ranked No. 5 in Texas before finishing 27-4.

Then he surprised many in the area with a decision to step down as WO-S head coach to become an assistant coach at Bridge City.

“I was burnt out. That’s as honest as I can get,” Shea Landry said Tuesday.

Spring sports coaching assignments are just one of many considerations for the men and women who split their time between teaching and coaching in high schools.

“One of the things Shea wanted was to coach varsity football, and coach DuBois was all for that,” Chad Landry said of the BC athletic director, Dwayne DuBois.

“It was just the right fit all the way around,” Shea Landry said.

The two Landrys have never worked together before.

Now they’re all in on turning last year’s slow starters into a season-long powerhouse.

Chad Landry reminds that the Cards were 14-10 and third-place finishers in the district when they entered the playoffs.

After going four rounds deep and joining WOS in the Class 4A Region III semifinals, they finished 21-14.

“I think we kind of snuck up on some people, based on our experience and youth,” Chad Landry recalled.

“People remember the run we went on but they don’t remember we were 14-10.

“But at that point, we were close to 25 games in experience. All our freshmen had about 75 at-bats. We got rolling at that point.”

A year ago, the Cardinals played five freshmen regularly. Chad Landry said five sophomores will start for BC this year.

He noted that six of the 12 players used in the Cards’ 2-0 win over Kelly in Monday’s season opener were making their varsity debuts.

Schuyler Thibodaux, senior catcher and McNeese signee, is back to lead the Birds, with Justyn Romero in center field, sophomore pitchers Peyton Havard and Logan Hamm among the top returners.

This weekend, Bridge City plays in the Jasper tournament with games there against Lumberton, Jasper, West Brook and New Caney Porter.

They’re home against Hardin-Jefferson Tuesday, Feb. 27 and open 22-4A play on the road at Silsbee March 20.

Chad Landry is starting his 15th season as head baseball coach. Shea Landry has six years under his belt.

But it’s the players who play.

“Last year we divided the season up into quarters,” Chad Landry said, “and we’re starting in that same mode. We’re trying to find out who can do what for us, who’s going to be our guy.

“We want to take these first three weeks and evaluate after that.”