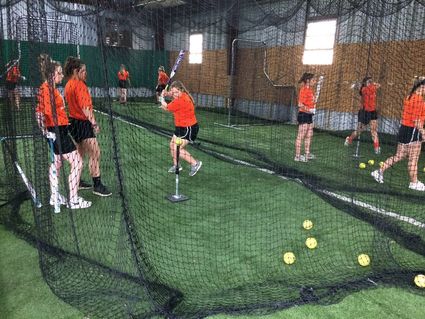 Over and over, the Orangefield girls practice the basics, so the results stand up when it’s time for something special.

A 10-1-1 start this season, which the Bobcats have earned, would be pretty special for any squad.

“Brick by brick,” softball coach Rebekah Ragsdale describes the process, at the same time repeating the words her players live by.

“We talk about it a lot,” she said. “Each practice, each game is a brick, and we’re laying our foundation. Everybody’s part of the foundation.”

The 2018 Bobcat softball team is building upon a solid foundation. Orangefield was 15-12 a year ago, making the playoffs with a fourth-place finish in District 22-4A then upsetting Lufkin Hudson in the opening round of the playoffs.

“Experience is one of our strengths,” the coach said.

Ancelot pitched every inning for the Bobcats, fashioning a 15-12 record while striking out 141 batters in 157 innings pitched. She had a 141:26 ratio of strikeouts to walks allowed and a 2.10 earned run average.

Frost led the team with two homers, 18 RBIs in district play and her .438 average in 22-4A games was matched by only fellow senior Kristin Broussard. Frost batted .333 for the season with 30 RBIs, four homers and nine doubles.

Broussard, a slap-hitting senior outfielder, matched junior second sacker Karlye Bramblett with a batting average of .354 for the second, trailing only Ancelot for the year. Broussard had one more hit than Bramblett, 29, while Bramblett finished third on the team in RBIs with 22.

Sophomore outfielders Tiffany Ciancaglione (.313) and Faith Fregia (.306) were the others topping the .300 mark at the plate.

Ragsdale is adding five freshmen to the mix, including pitcher Codie Sorge.

“We expect her and Kaylee to work together,” the coach said. “It’s good because it will take innings off Kaylee and keep her arm and legs fresher as we get into district.

“And having Kaylee means we don’t have to throw Codie into the fire yet.”

Another freshman getting into the fire is catcher Emma Humplik. Her ability has allowed Ragsdale to move Ciancaglione from behind the plate into the outfield.

Another newcomer in the outfield is freshman Ryden Stanfield, a speedster batting leadoff. Freshmen Olivia Grant and Heather Mineer round out the squad.

The Bobcats are headed west to play in a tournament hosted by Liberty, Huffman and Tarkington. It’s all part of a scheme to prepare for a district scheduled loaded with experienced players back from playoff teams.

Bridge City is the defending district champion, Little Cypress-Mauriceville and Silsbee finished second and third and they have most every player back.

“You can’t really pick one to zero in on,” Ragsdale said. “They’re all our targets. And they’re all super tough.”