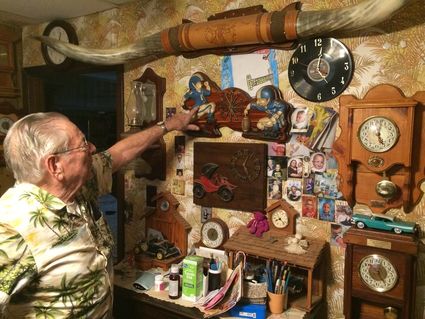 Roy McDaniel shows off one of his favorite clocks, one that is displayed between two cartoon football players he says represent his sons. The Orange man has more than a hundred clocks lining the wall of his cozy home. (Photo by Dave Rogers)

‘Cause that’s what you’re s’posed to do.

At 2 a.m. Sunday morning, wind those clocks ahead to 3 a.m. and you’ll be set for another seven and a half months of long afternoons.

Unless you have hundreds of clocks in your house to reset.

And he built most of them.

McDaniel, 93, a World War II vet and DuPont retiree, has many lifetimes of memories stuffed inside the cozy Orange home he shares with son Shon.

There are the 16 books he’s written about his family history. Add more than 100 model cars he displays to remind him of the 37 personal automobiles he has owned since he gained his discharge from the Army. There’s even a book about those cars, including photos and drawings put together by Roy.

There are family portraits dating back to the invention of the camera and it’s clear to see the love he has for his sons, Ronald and Shon.

A natural born collector, McDaniel grew up around saw mills and paper mills in the area of Louisiana that’s now home to Fort Polk.

He gathered up so much sawmill memorabilia that he built a sawmill museum in his backyard.

Then he donated it all to the folks at Fort Polk and for several years he returned once a year to lead tours of the museum.

“I had a museum out back and it was written up in the paper twice,” he recalled. “And one time, one woman came to see it.

“At Fort Polk, thousands of people come to see it each year.”

But clocks have been a semi-obsession since McDaniel built his first one in about 1980.

A member of Orange’s Calvary Baptist Church since 1951, McDaniel has called several generations of youngsters “my church kids.”

McDaniel is not a builder of the clockworks; he builds the cabinets for the works, almost all of which now are battery-operated.

“I don’t have anything that I have to wind up,” he said. “The grandfather clocks I had quit. The rest of them have batteries.

“When they quit working, or their pendulums quit swinging, I have to change the batteries. That’s a lot of work.”

Between the army and 44 years of working in five different plants along Chemical Row, McDaniel learned woodworking and drafting.

He employs both in building the housing for his clocks.

And, like any good historian, there’s usually a story.

He rescues wood from historic buildings and often includes a photo of the old building with the case he makes from the wood.

One of his clocks includes a recreation of an old schoolhouse from his childhood. He owns a painting of it with a 1925 Model T truck parked in front. His clock housing is an exact replica, down to a model of the Model T.

And, for added meaning, McDaniel has hung a late-20s photo of his grandmother holding young Roy in her arms.

That’s on side of his bed. On the other side, among the dozen or so clocks built into his custom head board, is a table clock that belonged to his grandfather.

Most of his clocks include an engraved plate explaining the work and the year of its creation.

They run from the 80s until just a year or so ago.

“I don’t build them [clocks] anymore, because I’ve got so many built I don’t have room to put any more up,” McDaniel said.