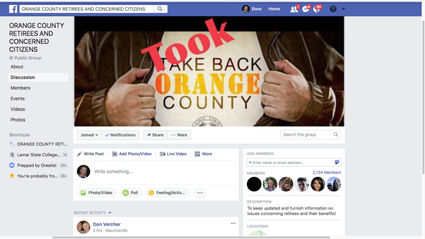 “I just had a mission, going back to April 2015, and I wasn’t going to quit until I either won or lost this year,” the Bridge City retiree said.

Burton paid $900 for a three-hour hand count of the ballots in the eight Precinct 2 voting boxes five days after last Tuesday’s machine tallies favored Beauchamp by four votes, 1,038 to 1,034.

Monday’s recount found two more votes for Burton, making the final margin two votes, 1,038 to 1,036, or slightly less than one-tenth of one percent.

It’s the first time since 1970 for a county judge and two commissioners to be voted out in the same election. Back then, Judge Grover Halliburton and Commissioners Gordon Dunn and Raymond Gould replaced Charlie Grooms, Allen Peveto and L.B. Williamson.

Parker was front and center among those pushing for an overhaul as the founder of Orange County Retirees and Concerned Citizens, a Facebook group that has more than 2,000 members.

Parker worked for the Orange County Sheriff’s Office for 23 years as a non-union secretary and purchasing agent, serving sheriffs Huel Fontenot, Mike White and Keith Merritt, before retiring in 2012.

She said she supported Carlton when he was running for office in 2014.

“I supported Brint, then the people started calling me and he had the retiree insurance on the agenda, to try to cut the budget,” she said.

“I started the Facebook page in April 2015. That’s when they started on all of our benefits.”

They cited rapidly escalating health care costs and tight county finances, along with a need to raise starting salaries, as reasons to trim post-employment benefits.

In September of 2016, a couple of weeks before the start of a new budget year, Burton put forth – and passed, by a 3-2 vote, a motion to apply a sliding scale for retiree health insurance payments, based on their years of service to the county. This took effect October 1, 2016 and affected every current full-time employee.

Prior to August 2016, county retirees could receive full lifetime health insurance premiums by working as few as eight years for the county – if they had already put enough into the state retirement system from another job.

In August 2016, commissioners by a 3-2 vote after a motion by Burton, adopted the sliding scale that pays 25 percent of insurance cost for retirees with eight years of county service, 50 percent for 12 years, 75 percent for 16 years and 100 percent for 20 years.

“I remember there was talk about the county needing to cut its benefits back when [Carl] Thibodeaux was county judge,” one longtime county employee recalled.

Another employee with 20-plus years of service talked about the change in atmosphere since Thibodeaux retired after 20 years as judge and Carlton took over in 2015.

“This three years have been the worst I’ve seen for morale,” he said. “With the old commissioners’ court, money was tight. We didn’t get nothing, but they didn’t take nothing away from us.”

Parker started her Facebook group with a few dozen members. Its membership skyrocketed.

Orange County has 382 full-time employees, according to Lori Ardoin, county human resources director. She said about 130 of those are Sheriff’s Office union members.

But, as Carlton found out, they all have families and friends who vote.

“I believe they did it to themselves,” Parker said. “It was the storm, their raise, the hospital election, all of those things become a perfect storm for me against them.”

There are 52,864 registered voters in Orange County, reports Tina Barrow, county elections administrator. Two thousand, 760 filled in the oval next to Carlton’s name on their ballot.

Crooks carried all but six of the county’s 34 voting boxes. Carlton won a majority of the votes cast at three in north Orange, one in Rose City, one in Vidor and another in Pine Forest.

Beauchamp took a majority of the votes in five of the eight Precinct 2 boxes, with Burton taking boxes 16 and 31 in Mauriceville and 32 at the Orange County Expo Center.

Viator had a majority in all eight Precinct 4 boxes, his best finish 82 percent in Box 20 at Vidor High, his worst 62 percent at Box 17 in Pine Forest, where Crump is a former mayor.

Crooks and Beauchamp will face Democratic opponents Donald Brown and Deborah Mitchell in the Nov. 6 general election. Viator is unopposed.