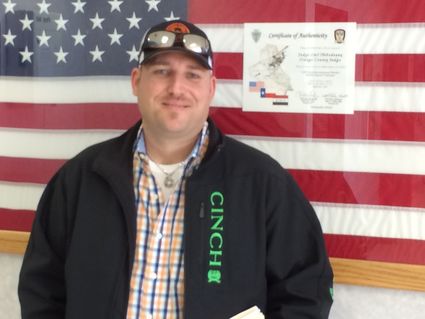 Cutline: Former firefighter Leon George has rolled with the punches since coming to work for the Orange County Emergency Management Department right before Hurricane Harvey.

No ride at an adventure park could beat Leon George’s short tenure with the Orange County Emergency Department.

George, a former Vidor fireman, went to work for the county on Aug. 1, just in time for Hurricane Harvey.

Then, as things seemed to be calming down after the storm, his boss, Emergency Management Coordinator Ralph Valenciano, was arrested for theft of services and resigned.

“It’s been pretty eventful. It really has,” he said when asked to describe his seven plus months on the job.

George said he worked during the days after Hurricane Harvey hit Aug. 29, 2017, to make the Expo Center home to thousands of police and National Guardsmen who rotated through Orange in various search and rescue and relief operations.

“I really just set everything up,” he said. “It’s not a big part [of the job description], but we were so low on people, everybody just had to help out where we could.”

His role was ever shifting.

After the worst was over, George was assigned to work as point-man with the county’s debris contractors as the cleanup began.

“I was on top of the debris mission and working on that. It was pretty hectic at first, but we smoothed everything out and got a lot of the kinks worked out with the contractors and everything and it went pretty smooth.”

The county is maintaining one truck picking up debris from residents and businesses just getting around to clearing their property. Residents are asked to call the debris hotline at 409-745-9809 with questions.

Valenciano, a former Emergency Management assistant for the county, was hired in November to replace Missy Pillsbury, who had been juggling her previous jobs as Risk Management and Airport Manager with EM work.

Valenciano was arrested March 5 after failing to make good on nearly $17,000 worth of checks paid to drywall contractors. He resigned his job the next day.

Sheriff Keith Merritt said Tuesday Valenciano has made good on the checks in the past few days.

“I’m trying to dive in,” George said of his new job.

“When I first started here, I dove into that part, then started working my way up during training and now I get hit with the interim EMC part.

“Now I’m trying to catch up on what needs to be done grant-wise and stuff like that. I’m updating annexes for the Emergency Operations Plan,” he said.

“I’m also catching up grants that are a little bit behind. I want to try to make sure we stay focused on that rather than let them lapse so we don’t lose money for the county.”