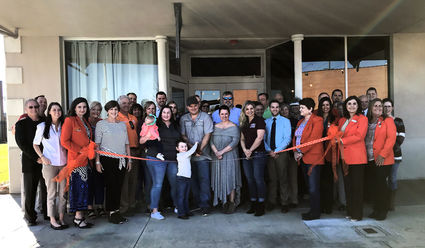 Photo: Jake and Lacey LeMoine, center, cut the ribbon for their Boardwalk Grille with the help of the Greater Orange Area Chamber of Commerce on March 13. The downtown restaurant is open in its temporary location at 109 5th St., awaiting the construction of a high-occupancy dining location across the street.

“I keep on upping the amount of shrimp I cook, but I run out of those every day,” Jake LeMoine said.

And just as LeMoine and wife Lacey have brought tasty lunches and evening crawfish and shrimp boils to downtown Orange with the recent opening of their Boardwalk Grille at 109 5th St., the pair aims to use good food and a bigger, open-air location across the street to bring people and commerce back to downtown Orange.

“I always wanted a concept like they had at the Wheelhouse [in Port Neches] and give it to Orange,” said LeMoine, who grew up working at and, eventually, running Spanky’s, his family’s restaurant on 16th Street.

“I remember when I was growing up, there was nothing in downtown Port Neches. But the Wheelhouse came along and the next thing you knew, they had the Neches Brewery and all sorts of stores downtown.”

Orange City Council recently unanimously approved an Economic Development Corporation agreement to spend up to $200,000 for infrastructure improvements at the 5th Street and Division location LeMoine plans to build his permanent Boardwalk Grille, with a groundbreaking expected within six months.

LeMoine, who has pledged to invest $850,000 in the project, envisions open-air dining on all sides of his yet-to-be-built building. It would overlook the Port of Orange and the Boardwalk.

In the meantime, Boardwalk Grille has moved into temporary quarters across the street.

“I had to do something,” he says, but acknowledges the current dwelling isn’t big enough. There are often more Lamar State students and downtown workers waiting to eat that can be seated.

“We’ve had a wait every day,” LeMoine said. “It’s a matter of not having a big enough building.”

The restaurant is open from 11 a.m. to 3 p.m. Mondays through Fridays for lunch and he’s serving crawfish from 4 p.m. to 8 p.m. on Wednesdays, Thursdays and Fridays.

“The only reason I close on weekends here is so I can actually sleep,” LeMoine said. “I’m here from 4 a.m. to 11 p.m. most days, having to do all the prep and cook all the meat.”

Hard work is nothing new to the chef. In his 30s now, he has spent most of his life in the kitchen.

“I’ve been cooking almost my whole life since I was 7 or 8,” he said. “I wanted spending money and my dad didn’t believe in giving money away.

“I’m really good with steaks and roasts,” he said.

But, oh, the shrimp tacos.

“I sell a lot of shrimp tacos,” he said when asked to name the food most commonly ordered by diners, who have come from as far away as Beaumont as favorable reviews spread in his first two weeks of operation downtown.

“I created my shrimp taco sauce about four years ago. There are anywhere from 15 to 20 ingredients,” he said.

“But other big sellers are the Philly cheesesteak, French dips, chicken salad and my brisket melt.”

The restaurant prepares phone-in to-go orders. The phone number for Boardwalk Grille is 409-330-4457.