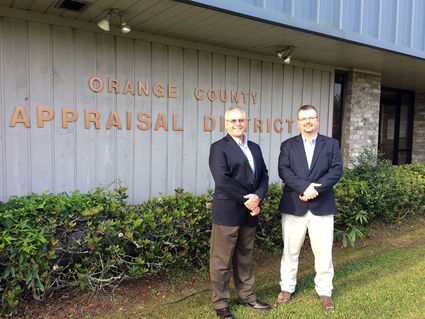 Photo: Mike Cedar, left, is retiring this month as chief appraiser of the Orange County Appraisal District and Scott Overton, right, is moving up to take the top job. (Photo by Dave Rogers)

Forty-five years after he first went to work for the Orange County tax office, Mike Cedars is hanging it up.

“It’s been an amazing run,” said the man who is stepping down as chief appraiser of the Orange County Appraisal District at the end of this month.

Deputy chief Scott Overton is taking over, with Tahia Washington, a 13-year OCAD employee, moving up to deputy chief appraiser.

“My wife Myrna – she’s a CPA -- and I have worked hard all our lives,” Cedars said. “As of right now, I’m planning to disappear. A lot of people have asked me if I was going to get another job. If I wanted to work, I’d stay here.

“We’re hoping to travel and do a lot of things. I have gardens to plant.”

The chief appraiser’s job is to determine market values for real and personal properties. Each of the appraisal districts taxing entities uses the values to set a tax rate that will provide the needed operating funds.

It may sound like Cedars has a thankless and onerous job, but he says that’s not so.

“This job is not painful,” he said. “I don’t know any other way to describe the people [taxpayers] here; they were pleasant to work with.

“Ninety-nine and nine-tenths percent of the people who have walked in this building have been just wonderful. You know they’re going through horrible, horrible situations and yet they compliment us.”

Cedars worked part-time and full-time for the Port Arthur ISD tax office during his college years and worked eight years for the Orange County tax office before state legislation created the OCAD in 1980 and he came aboard as an appraiser.

“It didn’t take much back then, just a warm body willing to go measure houses,” he recalled.

After 10 years with OCAD, Cedars spent the next 14 years working as property manager for Tony Houseman Corporation, “and somehow I got recruited back in 2004.”

Returning to OCAD as chief appraiser in 2004, Cedars oversaw a conversion of the appraisal system to computers.

“It was very painful, but we made it through,” he said. “During that time we started looking at all the things computers would allow us to do. We could build computers models but we also could use aerial photography.”

The system in place now allows OCAD to overlay basic blueprints of properties over aerial photos and with each year’s new photos – which very much resemble Google Earth – check each property for add-ons.

“Even part-time help can sit at their desk and measure the homes without going out there.”

Cedars said he has always made customer service his office’s top priority.

OCAD has 77,000 total accounts, he said. Each April, property owners receive their appraisal in the mail. Those unhappy with their appraisals can file a protest.

Out of those, 50 percent don’t follow up, Cedars said.

“Two-thirds of the rest are handled internally. They come in and talk to the appraiser, and we lower the appraisal, or they proceed to the appeal board,” said the retiring appraiser.

“Only about 200 will go before the appeal board, and of those 60 percent will get some kind of reduction. It’s a way for those who do have a [valid] reduction to get heard.”

Cedars notes that Hurricane Rita struck Orange County in 2005, not long after his hiring as chief appraiser, and he’s leaving in the wake of last summer’s Hurricane Harvey.

Orange County property values were raised an average of 6 percent in 2017, the first major hike in six years, Cedars said.

Overton will be the one taking the feedback on 2018 values that will start reaching property owners soon.

He notes OCAD mailed out 35,000 questionnaires in December asking property owners about damage caused by Harvey. The questionnaires asked owners to note the depth of water in their home, the home’s condition as of Jan. 1, 2018, and any dollar estimates related to the cost to repair the home.

But, Overton said, those who question their 2018 values can come into the office at 9157 IH-10 and talk to appraisers or file online for an appeal.

“Even just a phone call,” Overton said. “We can give them information they need to get the info we need to make a change.”

“We have seen quite a few flood-damaged homes that have been sold as-is,” Cedars said. “We have also seen the sales of houses that didn’t flood increase in values.

“It will take two to three years to see Orange County rejuvenate.”