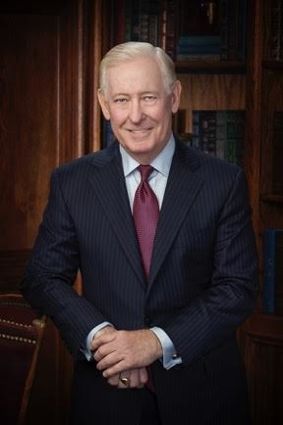 Having to wear leg braces as a youngster growing up in the 50s left pre-teen Larry Lawson at the mercy of school bullies, he recalls.

Larry’s response was to get really good at music.

So good, he started a rock and roll band named “The Clique” that turned out hit records and toured the country performing on the same bills as 60s Top 40 bands like the Dave Clark Five and Paul Revere and the Raiders.

Lawson said he was making about $70,000 a year, more than most plant managers, when family members told him to “quit and get a real job.”

Larry’s response was to take a medical device sales job for Johnson & Johnson calling on Houston doctors. Larry learned fast, and by the 80s, the Bridge City High graduate had started his own medical supply company.

Today, he is a millionaire venture capitalist with many successful medical innovations to his credit.

His winning ways will be saluted next weekend when Lawson receives the Horatio Alger Award in Washington, D.C.

Each year the Horatio Alger Association of Distinguished Americans honors the achievements of outstanding leaders who have accomplished remarkable successes in spite of adversity.

Among those on hand to congratulate Lawson will be former Texas A&M football coach R.C. Slocum, a former Bridge City kid who moved to Orange before becoming one of the country’s top college football coaches.

Slocum, “one of my closest friends,” Lawson said, was honored with the Horatio Alger Award in 2013.

Lawson credits his father, Charles Lawson, an auto mechanic who ran Lawson’s Garage in Bridge City, with teaching him to deal with adversity.

“Dad got tired of me coming to him as a young boy and crying every time I’d get beat up or something adverse would happen to me,” Lawson recalled.

“He took me over to where the car batteries were in the garage. He said, ‘See this battery. On one corner of the battery is the positive post, on the other corner is the negative post.’

“He told me that battery can’t be activated without positives and negatives. He taught me how to take negatives and turn them into positives.

Lawson is currently putting together a company working on the “next thing in medical tech,” the first totally implantable artificial heart.

Earlier advances he’s helped pioneer include a device that monitored atrial fibrillation, a heart condition that affects nearly 3 million Americans. I took my company, ECardio, from just me and a couple of people working there to 1,000 employees doing $100 million in business, and sold the company to Merck a few years ago.

“Today, I spend a lot of time at the Medical Center working with young doctors, scientists, PhDs helping them develop products. Today, I’m basically an investor.”

Lawson serves on the boards of a dozen companies, is chairman of six and founder of two new companies this year.

“I’m just keeping busy and giving back as much as I can.”

It turned out his family’s fears about polio were unfounded but young Larry wore braces for about five years while a bad fit between his hip and thigh bones corrected itself.

His parents, Charles and Etoile, bought him a piano. Larry studied classical music, but preferred to play rock and roll tunes. By the time he was a teenager, he had written and copyrighted some songs.

“Once I started writing, I got to be cool,” Lawson recalled.

At Bridge City High, he played first chair trumpet from his first day and was recruited for the Lamar University band.

“By the time I got to high school, I wasn’t bullied any longer and I was considered halfway cool because I could play music,” Lawson recalled. “I kind of came out of my shell.”

In high school, Lawson formed his first bands with guys like brothers Edgar and Johnny Winters, playing keyboards. By the time he was a junior at Lamar, the music business beckoned full-time.

Lawson did receive a Doctorate from Lamar in 2012.

His last band, the Clique, had hits with Sugar On Sunday, Superman and Hold Out My Hand. Not long after its first album, Splash1, was taking off, Lawson jumped to medicine.

“I left the band I started in 1969,” he recalls. “I had a lot of pressure from my family that felt I should get a real job. After going into the medical business, it took probably another 10 years, maybe 15 years, to make as much money.”

But Lawson never looked back, “because I loved the medical business. Doctors told me what they wanted and needed and I’ve always had the ability to figure it out,” Lawson said.

“Dad told me a long time ago, if it can be thought of, it can be done. My dad always told me I could do anything I want to and I never thought any differently.

“I started my first company in 1982 and I’ve been starting them ever since.”