It wasn’t the first air-conditioned building in the country and it’s probably not the oldest church in town.

But Orange’s First Presbyterian Church isn’t too far down either list.

“We’re one of the two- or three-oldest churches in Orange,” Pastor Mike Umbenhaur said. “We have a long-time presence in this community, and in this building.”

And Friday, the church is turning 140 years old.

That’s a lot of candles, so it’s a good thing the A/C is back on after getting knocked out by Tropical Storm Harvey.

What church members brag is the first air-conditioned building west of the Mississippi River opened at 902 West Green in 1912, some 35 years after the church was founded in 1878.

That wooden structure -- a far cry from the two story granite, marble and stained glass masterpiece built by one of the wealthiest women in the world -- was located at the corner of Market and Polk Streets, not far from the current sheriff’s department.

According to a history published by the church, W.H. Vernor and R.H. Byers, representatives of the Presbytery of East Texas, arrived to start the church. The group petitioned for the new church establishment on April 6, 1878, church records say.

The original Presbyterian church building in Orange was dedicated July 1, 1883.

The church was, in effect, built around those special works of art, which rise high above the front door.

Lambs Studios crafted almost all the other stained glass windows and murals in the church. James Oliver Hogg of Kansas City was the architect, using pink granite from Central Texas on the outside and lots of Italian marble on the inside.

The dome of the two-story building is believed to be the only one of its kind today, of opalescent glass with an outer coating of copper to protect it. The dome features 16 angels, each bearing a Christian symbol.

A sculpted angel hangs from the top of the marble stairway inside the front door that transports congregants to the second-floor sanctuary. A pair of angels are suspended over the pulpit.

The sanctuary has posh seating for 200 but Pastor Umbenhaur says church membership was three or four times that during the 1950s and 1960s when shipbuilding and the U.S. Naval base was thriving at the Port of Orange.

“I still to this day can’t believe I’m here,” Umbenhaur, in his 10th year at the church, said when asked about working among such history. “It’s very hard sometimes to get things done, in a good way.

“I’ll go into the sanctuary if I’m in a writer’s block and I’ll lose track of time.”

Among the innovations Mrs. Lutcher had built into the building was a heating, cooling and lighting system installed by the Carrier Company.

(Church members now say that they’ve heard of one air-conditioner in New York City pre-dating theirs.)

To make sure it kept running, contractors built a private power plant behind the church building and Mrs. Lutcher hired a full-time engineer.

The whole project was meant as a memorial to the Henry Jacob Lutcher Family, so the structure was known as the Lutcher Memorial Building.

An endowment was set up by Mrs. Lutcher to assist in maintaining the building. The Carrie Lutcher Brown Foundation was additionally established in 1942 by Lutcher grandsons Edgar and Lutcher Brown in memory of their mother, Mrs. Lutcher’s daughter.

“The fund they established has grown a little bit, but at the same time the needs of the building as it’s gotten older have gone beyond what the fund can achieve.

Like a lot of traditional congregations in small towns, First Presbyterian has seen many of its longest-tenured members die or move away to live with grown children living elsewhere.

And then there was Harvey.

She has four generations of her family attending church there, following the lead set by her husband Dickie’s grandfather, George Samuel Colburn, who worked for and with Lutcher Stark, Mrs. Lutcher’s grandson.

The church remains active in the community, she says.

For more than 30 years, it has hosted a soup kitchen for the needy twice a week, Tuesdays and Fridays for lunch.

“We also have a day school that’s been around since the early 50s, with children from 18 months to kindergarten enrolled.”

The church building basement swallowed six feet of water from Harvey and the congregation held its weekly services in the adjacent gymnasium for six months.

Umbenhaur says since Harvey, the members have merged their two Sunday services into one, at 10 a.m., and serve a meal afterward.

“We had a few little bumps but it has been the best thing,” the pastor said about merging the services. With lunch afterwards, people are getting to know each other and commiserate together about the hurricane.” 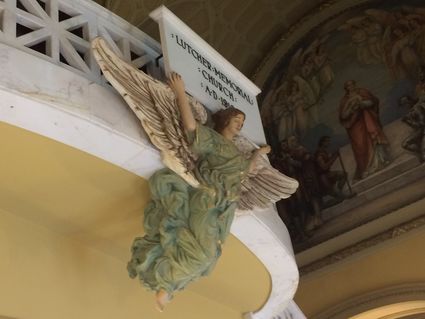 A sculpture of an angel hangs from the top of the marble “Angel Stairway” in the foyer of the First Presbyterian Church in Orange. RECORD PHOTO: Dave Rogers

Colburn says members will continue to pull together. Because that’s the First Presbyterian way.

“I think we do pretty good for a congregation of our size to take care of everything, because it’s a constant thing just to keep that building up.

“But we are just as constant to reach out to community and find ways to serve the community.”