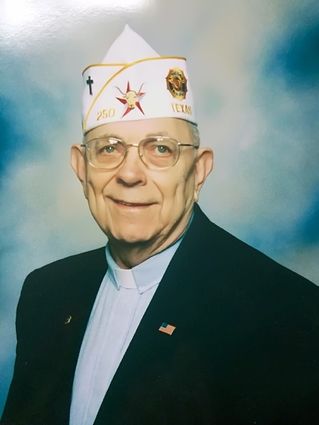 Reverend Marv Howland, 86, of Orange, Texas went home to be with his Lord on April 2, 2018, at his home surrounded by family. He was born on March 18, 1932, in Buffalo, New York to Charles Daniel and Dorothy Florence (Martin) Howland.

A visitation will be held at Claybar Funeral Home in Orange from 5:00 p.m. to 8:00 p.m. on Saturday, April 7, 2018. His memorial service will be held at St. Paul Episcopal Church at 1401 Park Ave. in Orange at 2:00 p.m., Sunday, April 8, 2018. Interment of his cremains will follow in the church memorial garden with Military Honors provided by the Texas Military Honors Team.

A celebration-reception will be held in the church parish hall following the interment.

Marv was a combat veteran of the Korean War and was with the 101st Airborne Division when his son Mark was born at Ft.

Marv was later in the NY Reserves and Guard, and then in the Texas Guard where he received a direct Commission as Captain and appointed as Bn.

Marv was retired from Allied Chemical Corp. in 1987 as a manager with 33 years of service.

At the time of founding, Marv was chaplain of American Legion Post 49, VVA chapter 348, VFW 2775, The Retired Officers Association, and the Texas State Guard.

Marv and his wife left the group after 20 years of devoted service.

His primary ministry was to military veterans, but he ministered to everyone he could.

Marv served as a Chaplain at burial services for thousands of Texas and Louisiana veterans since the late 1960s.

Marv served as Chaplain for most of these organizations and was the American Legion Chaplain of the State of Texas for the years 2004-2005.

He was selected as Officer of the Year of the 208th M.P. Bn.

He had received many other awards for his service including the Lifetime Achievement Award for volunteerism from President Bush, The Jefferson Award in 2007.

Marv and Arlene also received the Tears from a Grateful Heart Award from the 1stNazarene Church of Orange, and a special award from the Southeast Texas War Museum Association, and countless others.

He was preceded in death by his parents; his first wife, Mary Crouse, sisters, Evelyn Beebe and Elva Grillo; brothers, Norman, Eugene, and Wilfred; his beloved mother-in-law, Joyce Jones; and sister-in-law, JoAnn Wallace.

Marv appointed as honorary pallbearers- all area ministers, funeral directors, doctors, nurses, law enforcement officers, judges, journalists, veterans, and co-workers that Marv’s life was enriched by during his long ministry. Marv said his life was filled with more love and support than any man could desire or be entitled to.

Marv wanted everyone to share in his joy of graduating to his new and higher level of everlasting life and asked that in lieu of flowers, memorial donations be sent to St. Paul Episcopal Church Memorial Fund (1401 W. Park, Orange, TX 77630) or to The Texas Military Honors Team (P.O. Box 22599 Beaumont, TX 77720).