SORRY FOR THE MINOR INCONVENIENCE 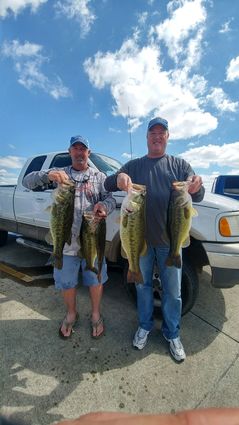 The much anticipated Bassmaster Elite tournament scheduled to take place this week has been postponed with hopes of rescheduling it at a later date.The logistics around making that happen are daunting, but we will hope for the best!

A line of thunderstorms that passed through quickly and initially appeared to have spared the immediate area, dumped an incredible amount of rain north of Orange. Additionally, the SRA was forced to open eleven gates on T-Bend and generate 24/7 in an effort to draw the lake back down to pool level without inundating Deweyville and the lower river one more time.At least for now, the proactive measure has worked!

Unfortunately, it was still too much water to safely host the tournament and a countless hours of planning were all for naught.An event of this magnitude is not simply a matter of running down to the boat launch to watch the take off and weigh-in!

Local retailers, from restaurants and hotels to convenience stores, saw a week long financial boost washed away, but they were far from being the only

losers. Vacations had to be rescheduled or used for something far less entertaining, vendors and coordinated entertainment groups found themselves without a gig, and how much money was wasted by pros that have been scouting the area for months?

Spectator expectations and anticipation, however, easily took the biggest hit.Area folks have been talking about the Bassmaster Elite returning for months.Having already set attendance records the last time the pros were here, there was little doubt those records would be broken again.

I am yet to hear of any proposed dates for rescheduling, but it will be a challenge for all involved.At least one major concern will be the heat should they choose to do it this summer.Aside from the fact that the launches are currently underwater and the usually sluggish river is racing to the gulf, the weather could not currently be better for the spectators.

Standing on concrete in 100 degree weather for even a short span of time can be brutal for spectators.It is good for the vendors selling cold drinks and lemonade, but hell on the soles of walking shoes and sandals.Just ask the handful of spectators that manned up at the final weigh-in at the last Redfish Cup Tournament.

And, the later you are forced to reschedule, the greater the chances of a tropical storm or, heaven forbid, another hurricane.Mother Nature has been on leave from hell this year and the most modest shot of good weather is no longer taken for granted.

I know the decision to postpone, even though it was the right one, was agonizing for all involved. The irony is that the bass fishing on the final leg of the Sabine has never been better in the history of the river.Up until a few years back, I found myself occasionally wishing that my Grandson could have seen how good it was in the 50’s and 60’s than it is now.

We caught incredible numbers, but nothing to rival the size of the bass being caught just since the last Elite event.The numbers are as good or better and the expectation of fooling a seven to nine pound bass is very realistic.Who would have ever thought it!

The Bassmasters returned home following that last event more excited about our boudain than the size of our bass.Lowering the length limit to 12 inches also pleased them. Since then, sixteen to eighteen pound stringers hardly draw a second look.

Two bass over nine pounds were weighed in last month alone and two stringers in a tournament last weekend yielded 21-pound plus catches with yet another heavy eight pound kicker fish.At the last Elite tournament an eight pound total was considered a solid day!

I don’t think we would have seen those kind of weights posted this week only because they could not fish Louisiana waters for fear of fishing on posted navigable water.Not only are a number of these larger fish being caught on the Louisiana side of the river by local anglers, but that law leaves a lot less real estate for the pros to fish.

So…… we are now left to hope that the folks that worked so hard to bring this tournament to Orange can do so again sooner than later and perhaps even Louisiana would change that restricting law as well.