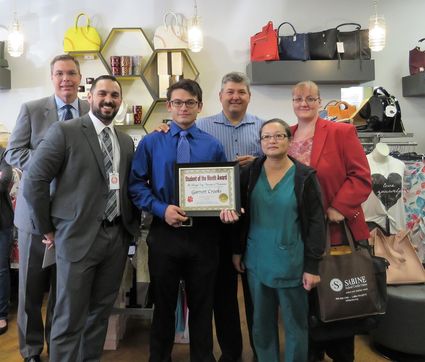 Bridge City, Texas, April 10, 2018 – The Bridge City Chamber of Commerce is pleased to announce that the April Student of the Month for Orangefield High School is Garrett Crooks.

Garrett was presented his certificate and gift bag by Bridge City Chamber Ambassador Candice Trahan, of The Orange Leader and Balancing Life LLC Virtual Assistant and Staffing, at the April coffee hosted by Sweet Bee Boutique and Desserts.

Garrett is the son of Dean and Loren Crooks. He has a GPA of 4.54 and is ranked 14 of 109. Garrett’s awards and honors include:

Garrett’s clubs and organizations include:

Mr. Chevalier, English Teacher, said, “Garrett Crooks is an insightful and reflective young man. His upbeat attitude when given a challenge is a refreshing experience in the classroom.”

Over the past 12 months, he has enhanced his speaking skills, confidence, and composure.

All of these have helped him grow into a determined senior.

Garrett has a plan and determination to reach his life goals: he wants to attend Texas A&M University, continue his studies in graduate school, and serve his community as a mechanical engineer.

As my student aide, Garrett is willing to help out in many ways.

Whether it is making photocopies, finding caffeine for me, or running a random errand, he completes the task before him without complaining.

Paula Droddy, Technology Teacher, said, “Garrett is a young man who aspires to achieve and stands up for what he believes.”

Mrs. Oregel, Math Teacher, said, “Garrett is a hard-working young man. He is very quiet, but I enjoy having him in class. Great student!”

Mrs. Jenkins, Chemistry Teacher, said, “Garrett is a very clever and thoughtful young man. He is polite and respectful. I know he will continue to be successful through college and beyond.”

After graduation, Garrett plans to attend the Texas A&M University in the fall where he will pursue a degree in Mechanical Engineering. After college he would like to work in the automotive design industry.