Teacher’s second job has ring to it

Cutline: Bridge City elementary teacher Jenny Duncan shows off her Houston Astros World Series ring Tuesday. A part-time ticket seller for the baseball team for more than a decade, Duncan received her personal ring from the team at a reception Monday night.

The sparkle on Jenny Duncan’s face Tuesday was the rival of any 214-diamond bauble that might bedazzle the ring finger of a Houston Astros player.

The Bridge City kindergarten teacher was busy showing off her own 2017 World Series championship ring.

Duncan, a first-year teacher at Bridge City Elementary who spent the past four years teaching in West Orange, has worked part-time for the Houston Astros since 2006, in the box office.

Monday night, it was time for the ticket sellers to collect.

“It was a complete surprise,” Duncan said of the idea of receiving a big ring just like the ones the players earned, minus the jewels.

“I received an email in January and at first I thought it was a joke. ‘Are you serious?’ I called my boss. He said, ‘No, this is real.’ He said it was a gift from Jim Crane and [team president] Reid Ryan.

“I feel extremely blessed and appreciative that they would give us this honor.”

A native of Bridge City, Duncan was living in Houston when she started working for the team.

“My aunt is really big into baseball,” Duncan said. “I was looking for a job, and she said, ‘Hey, have you ever thought about working at the ballpark?’ I applied for the ticket office and they hired me for the 2006 season.”

Back then, she could work at all the home games.

Now, she works only on Saturdays during the school year, then all summer long.

“I think I’m probably the only one in this area that drives two hours to work at Minute Maid Park,” she said.

“But I love my bosses and I love the Astros.”

The Astros were just coming off an unsuccessful trip to the 2005 World Series when she went to work. But there were a lot of lean times for the team in between, including three straight 100-loss seasons.

“There were definitely lots of seasons when there were hardly any people that came to games, when it was slow and I hardly sold any tickets at all,” she said.

Astros tickets are priced based on demand now. Duncan says $20 is about the cheapest available.

And she likes that even though the Astros have a top-dollar team, they remember “the little guys.” 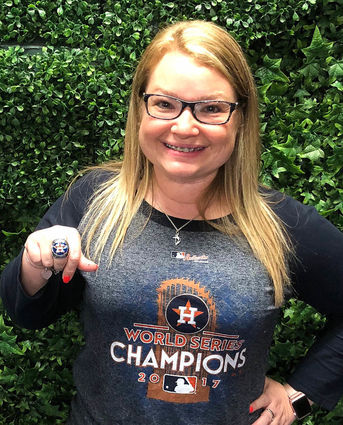 “Jim Crane said in the newspaper he wanted to remember the little guys,” Duncan said. “He said it was important we all get something because we all play a part in the team.”

Back with her Bridge City team Tuesday, the teacher was sparkling with her ring.

“It is very big,” she said. “I’m wearing it today, showing it off to kids in my class.

“We’re going to have a little party to celebrate, then it will go on to the shelf to look at every day.”