And then those he’s leaving behind punted the question about his replacement.

Carlton, 36, was defeated in his re-election bid by political newcomer Dean Crooks in the March 6 Republican Primary.

Still, Carlton was expected to serve out his term, which doesn’t expire until the end of 2018, seven-plus months away. Instead, he announced Fridayhe’s leaving at the end of this week to take a job in Austin as the executive director of the Texas Medical Board.

Listed at the end of Tuesday’s agenda were possible action to accept Carlton’s resignation and appoint a replacement to fill out the term that ends Dec. 31, 2018.

Those items were moved to the first of the meeting, to accommodate Commissioner John Gothia, who had to leave early because of a family illness.

“We accepted the judge’s resignation, that was the first step,” Commissioner Johnny Trahan said afterward.

“The second step was naming someone, but we asked legal [court attorney Denise Gremillion] if it was eligible for a closed session about naming someone because we need to have some conversations.

“We’ll talk about it next week,” Burton said. “You’ve got to look at who’s available. You don’t want to ask anybody to quit a job to do this for a few months.

“You need to find someone who has some experience because we’re in a critical time. The budget is about to come around. We’re in the very middle of dealing with this hurricane recovery. We’re going to have to have some discussions about it and see who fits that bill.”

While that bill – and the interim judge job -- remained unfilled, Carlton’s final meeting as county judge saw him announce the hiring of another Emergency Management Coordinator – his fifth since 2015.

Joel Ardoin had been named and this one required some interdepartmental juggling. Ardoin has been the county’s director of environmental health & code enforcement for 14 years.

By a 5-0 vote, commissioners merged Ardoin’s old department with his new one. 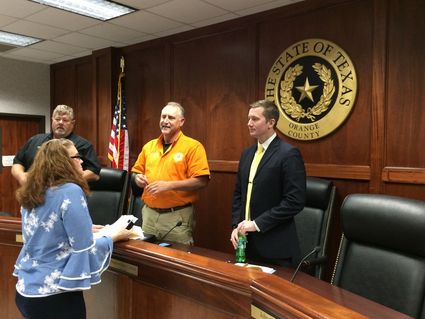 He served as Incident Commander for Orange County during Hurricane Harvey.

“Joel’s been very involved with emergency management for a while now,” Carlton said. “So, with that experience, the background, having the vacancy in the EMC position, to me it made sense putting him in, have him over both those roles.

“Especially now that we have Michelle [Turbiville] and Morgan [Taylor] working in there, so now there’s four people working in emergency management instead of two as before. That makes it a little easier for someone to be dual-hatted.”

“We’ll just be busy,” said Ardoin, whose pay was bumped up a grade to recognize his added responsibilities.