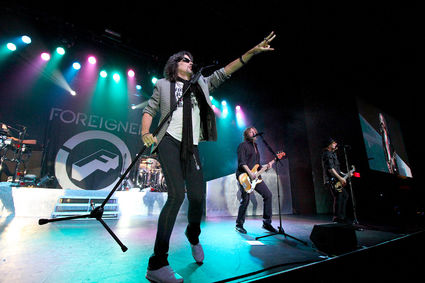 Kelly Hansen, the vocalist for rock band Foreigner, along with his bandmates, return to the Golden Nugget Casino in Lake Charles for the first time in 15 months with a performance at 8 p.m., Saturday, April 21. Few tickets remain for this concert. Visit http://www.goldennuggetlc.com for tickets and information on this show.

One of the biggest record selling bands in rock history is headed back to Southwest Louisiana for what is expected to be another sold-out event.

Rock band Foreigner returns to the Golden Nugget Casinoin Lake Charles, La., on Saturday, April 21, for a concert inside the Grand Event Center for ages 21 and older. Tickets are available by visiting http://www.goldennuggetlc.com but could sell out before the performance.

Foreigner, which formed in 1976 and features original member and guitarist Mick Jones, has sold more than 75 million records around the world on the strength of hit songs “I Want to Know What Love Is,” “Juke Box Hero,” “Hot Blooded,” “Urgent,” “Cold as Ice,” “Feels Like the First Time” and many others.

Along with Jones, the band consists of Kelly Hansen, vocals; Jeff Pilson, bass; Tom Gimbel, saxophone; Michael Bluestein, keyboards; Bruce Watson, guitar; and Chris Frazier, drums. The group spent most of 2017 on the road celebrating its 40th anniversary of recording and touring, and, according to Hansen, is still celebrating.

Hansen said the 40th anniversary celebration had some personal highlights, but probably more so for the fans who got to see some of the original members of Foreigner return for appearances along the tour trail last year.

“There were even a couple of instances where we filmed and recorded those performances, and those should be out by the end of the year, hopefully,” he added. “It was all so cool.”

Although Hansen occupies the vocalist position once held by original vocalist Lou Gramm, he knows the importance of the group’s legacy. Few bands have sold as many records around the world as Foreigner has, and even fewer have been able to celebrate a history of 40 years of recording and performing.

“I take my role in the band very seriously and I feel very fortunate to be a part of it,” Hansen explained. “I give it my best when I am on stage every single night and it is my responsibility to do that for our fans because they deserve it.”

The tour trail in 2017 also led Foreigner back to Europe, where the band still retains a large following. In fact, that was a key component to the group’s worldwide success when it began so many decades ago.

“When the band first broke in the 1970’s, the record label wanted the group to focus largely on the U.S,” he said. “But Mick (Jones) realized the importance of establishing a foothold in Europe early on. It is because of that vision in the early years that we are still able to go over to Europe and do so well.”

Hansen said the band plans to return to Europe in the coming weeks, and, coincidentally, will be promoting its forthcoming April 27 release, “Foreigner with The 21st Century Symphony Orchestra and Chorus.”

The new release was recorded in Switzerland in May 2017 and features a 58-piece orchestra and 60-piece choir. According to the band’s website, it will be available in several formats, including CD, digital, double vinyl, as well as a CD/DVD digipak which will be available only at Walmart.

With most undertakings of this scope, one might expect a variety of issues to arise or plague the production. Hansen said that was not the case.

“The biggest challenge was really trying to think of the possibilities that might have from filming and recording those two shows in Switzerland,” Hansen said. “It was just such a beautiful place. Despite having over 100 people on stage each night, we did a good job of planning and thinking it through so we would not have those potential problems.”

Following the conclusion of its current tour at the end of April, Foreigner travels to Europe from May 5 through May 27 in Bulgaria, Switzerland, Germany, England, Iceland and even opens the tour in Israel.

The summer for Foreigner will be red hot as the band teams up with Whitesnake and Jason Bonham’s Led Zeppelin Experience from June 15 through Aug. 12, which includes a July 20 performance at the Cynthia Woods Mitchell Pavilion outside of Houston. And, for the fall, the band will travel to Australia and New Zealand with symphony in tow.

“We are always on the road, so what we have lined up for this year is pretty much the same for what we did last year,” Hansen said with a laugh. “We work a lot, but it’s something we enjoy doing, and, thankfully, the fans still enjoy it as well.”